‘Ashaiman To The World’ Ends With 42 Suspects Being Arrested

By OEntertainment (self media writer) | 5 months ago 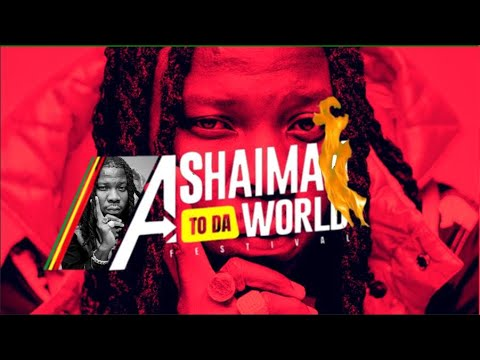 The 7th edition of the “Ashaiman to the World Festival” held last Saturday at Ashaiman after being postponed twice due to Covid-19 took music lovers to another level.

The annual concert hosted by Livingstone Etse Satekla also known as Stonebwoy shut down the Saka Saka park in Ashaiman.

This edition of the concert, unlike the previous ones, brought a lot of residents and people from around the world to enjoy good music and to interact. 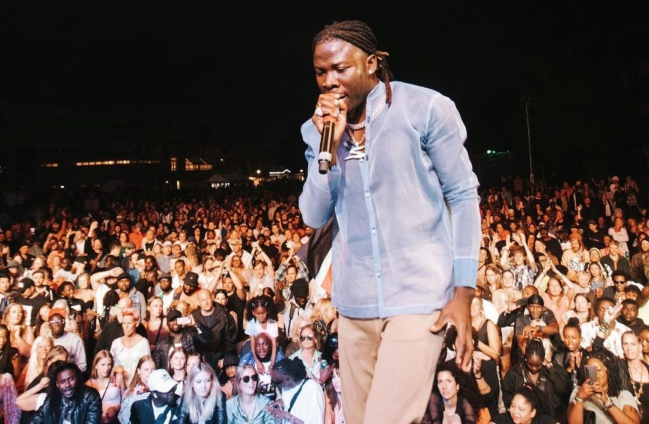 Stonebwoy shook the stage alongside some artists who were invited to the concert. Other artists brought their A-game and made the place lively.

It was all fun and exciting when the Police were prompted on what some of the people at the event were doing.

The police arrested suspects who attacked some of the fans with toy guns, cutlasses, knives, scissors and other offensive weapons at different locations towards the end of the concert.

The Police in a tweet said "the suspects attacked some of the fans with toy guns, cutlasses, knives, scissors and other offensive weapons at different locations towards the end of the concert. 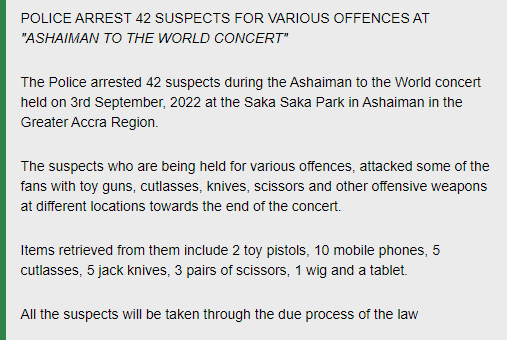 Items retrieved from them include two toy pistols, 10 mobile phones, five cutlasses, five jack knives, three pairs of scissors, one wig and a tablet. All the suspects were taken through the process of the law.

Few days before the concert, it could be recalled that Stonebwoy challenged claims that Ashaiman was a crime-ridden town.

He questioned the reasoning behind tagging his “home grounds” as a crime-ridden community when there’s never been a bank robbery there.

Having established that at his ‘Ashaiman to the World’ festival, security will be ensured but personal precautions were also important, he spoke on the perception that Ashaiman is a crime town.

“Someone will say, as for Ashaiman, it’s full of thieves and other criminals but that’s you holding on to the old perception. If it were so, ask yourself have you ever heard, excuse me to say, there’s been a bank robbery in Ashaiman? They say we are strong-willed and unruly but have you heard of such a thing before?”

Stonebwoy continued,  “The chief of the town was even talking about it today; it’s very important that we highlight these positive things.

“Ashaiman is a place where you can live without your parents and know that the community is looking out for you. I’m telling you. That’s where I grew up.”

“It’s one of the places where you know the town is your mother and your father because everybody is surviving over there,” he remarked.