The origin of Dipo rites and how the practice is still in existence in Ghana.

By Jonnexgh (self media writer) | 8 months ago

In this article, I present to you more insight of one of the still practiced, popular and powerful culture practices in Ghana thus, the Dipo rites.

Roughly sometime between the fourteenth and eighteenth centuries, a woman named Nana Klowki appeared on Krobo Mountain, located in the Eastern region of Ghana. When asked where she came from, Klowki gave no answer, saying only that she was a Priestess who was in constant communication with the spirits around her. Because these were times of sporadic warfare, the Krobos quickly allowed Nana Klowki to take shelter with them, and soon enough she became an important part of the Krobo community as one of the most esteemed deities on the mountain. 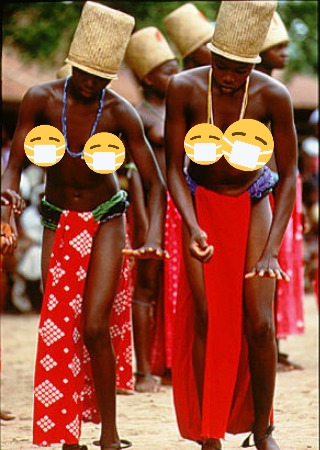 But Nana Klowki had a problem with the Krobos: she understood that all Krobo men were circumcised, but she feared that the Krobo women had no way to distinguish themselves from the Akans, the Ewes, or any other peoples in Ghana. Klowki felt it unfair that boys had an essential process through which they were able to transition into adulthood and into the Krobo community, but that the similar process for girls, named dipo, had little significance attached to it. Seeing this problem, Klowki developed the dipo ceremony into one which she planned to use more fully as a tool for ushering girls into womanhood. She hoped to make dipo more ceremonial and to fashion it into a process through which she could teach girls the ways of femininity and beg the spirits to protect them and bring them success. Soon enough, all parents were requesting that Klowki perform dipo for their daughters; and even after Klowki mysteriously vanished, dipo remained an enormously important facet of Krobo girls’ transformations into true Kloyo (Krobo women). 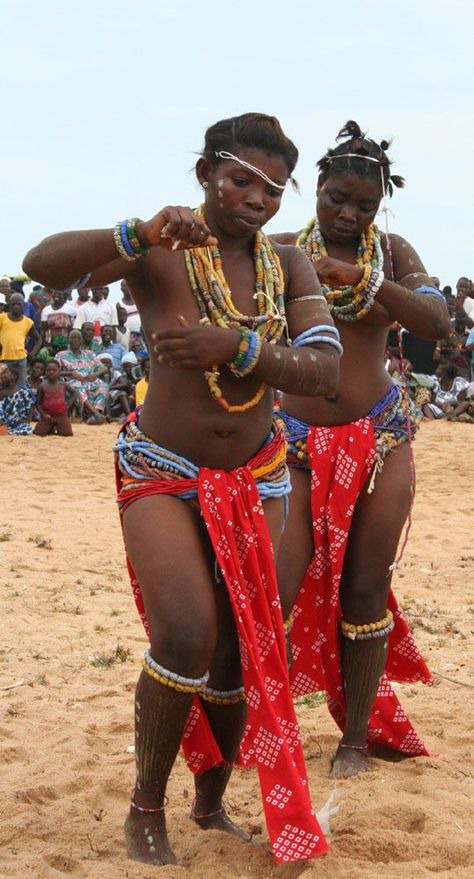 However, in the 1800s, the arrival of the Basel Missionaries posed a great threat to the dipo ceremony. The missionaries stated that, “[dipo] is incompatible with Christianity and has to end because of its horrible influence, customs, and rules”.

The Christians therefore attempted to abolish dipo by convincing the Krobo people that the practice was inherently un-Christian and therefore entirely heathen. However, the missionaries quickly discovered that, “The dipo ceremony… made the conversion of girls and women extremely difficult”, because the Krobo people had such a strong belief in its necessity. The missionaries’ hope was to replace the dipo ceremony with formal education in order to eradicate the process and instill Christian practices within the Krobo people. Slowly, the missionaries’ plan seemed to succeed, with more and more Christian converts promising to forgo the dipo rites for their daughters. 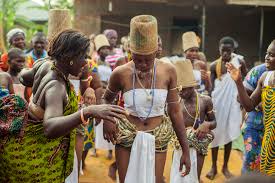 However, “by the late 1880s, an increasing number of converts were returning to their old religious practices. It was not that they rejected Christianity completely; they wanted to be part of both worlds”. And today, this is mostly how dipo continues to exist: there are some Christians who reject the process outright, but the vast majority of people in Krobo practice Christianity while also attaching great importance to the dipo ceremony. Though the specifics of dipo have changed as a result of both education and Christianity, the general idea of dipo as a way for girls to move into womanhood continues to flourish among people in the community; and it is a widely accepted notion that a young girl can only be considered a Kloyo once she has had the rites performed for her.

Dipo is a Ghanaian traditional festival celebrated by the people of the Krobo land in the Eastern region of Ghana. The festival is celebrated in the month of April every year.The festival is used to usher into puberty or adulthood, girls who are virgins and it signifies that a lady, who partakes in it, is of age to be married. Parents upon hearing announcement of the rites send their qualified girls to the chief priest. However these girls would have to go through rituals and tests to prove their chastity before they qualify to partake in the festival.On the first day of the rites, the girls have their heads shaved and dressed with cloth around their waist to just their knee level. This is done by a special ritual mother and it signifies their transition from childhood to adulthood.They are paraded to the entire community as the initiates (dipo-yo). 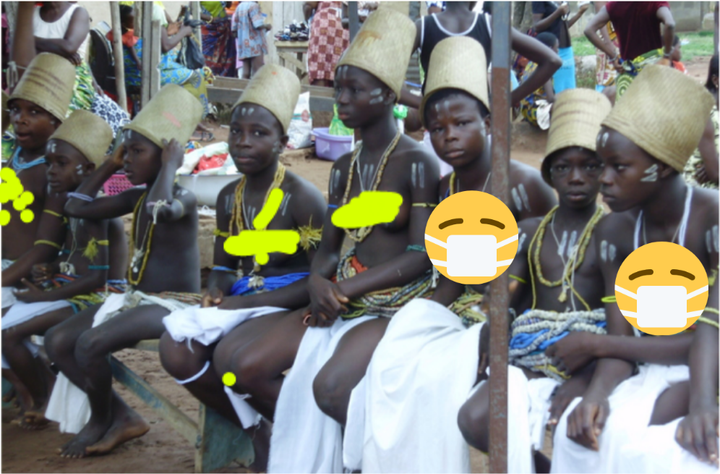 Early the next morning, the chief priest gives the initiates a ritual bath. He pours libation to ask for blessings for the girls. He then washes their feet with the blood of a goat which their parents presented. This is to drive away any spirit of barrenness. The crucial part of the rite is when the girls sit on the sacred stone. This is to prove their virginity. However, any girl found to be pregnant or not a virgin is detested by the community and does not entice a man from the tribe.

The girls are then housed for a week, where they are given training on cooking, housekeeping, child birth and nurture. The ritual mothers give them special lessons on seduction and how their husbands will expect to be treated. They learn the Klama dance which will be performed on the final day of the rites. 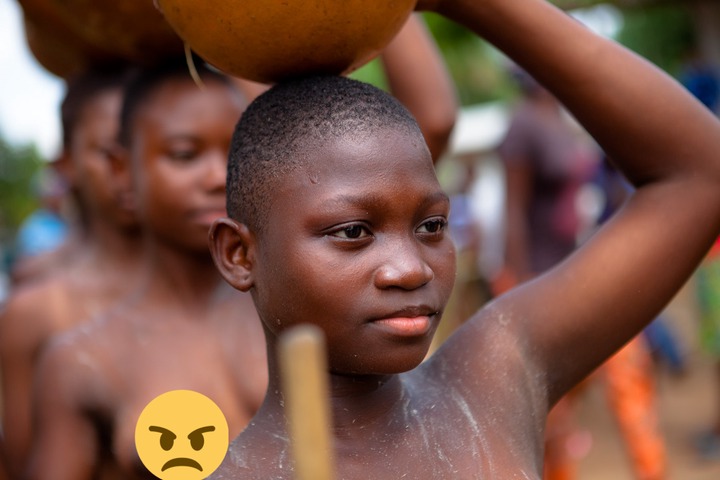 After the one-week schooling, they are released and the entire community gather to celebrate their transition into womanhood. They are beautifully dressed in rich kente cloth accessorised with beads around their waist, neck and arms. With singing and drumming, they perform the Klama dance. At this point, any man interested in any one of them can start investigating into her family. it is assumed that any lady who partakes in the rites not only brings honour to herself but to her family at large. It is done to initiate young women into knowing their responsibilities before stepping into marriage.