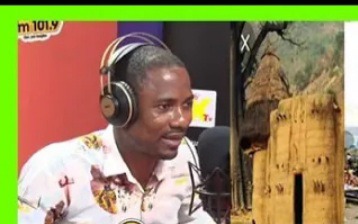 Akwasi is a man from Togo- Vogasukome who had about 370 gods in him at the age of six has revealed how he got his powers. According to Akwasi, his parents were farmers, the father too was a palm wine tapper and also a fetish priest. In their family, they worshipped the gods, once a child is born in the family he will be dedicated to the gods. The fetish priest will use cowries and tell the child's destiny.

That day they will give the child a gods to worship, build a mud room and put a pot which contains the gods in the room. When the child starts speaking, the parents will then tell the child that anytime he/she eats or drink, he should put some in that mud room for his gods. So the child will start worshiping the gods from childhood. When Akwasi was born the fetish priest came to determine his destiny and gives him gods but he didn't see anything, they called another fetish priest, he too was not able to see his destiny.

A third one came and told his parents that Akwasi's gods are very strong. His father too was having 300 gods and all of them wanted Akwasi to serve them. So when he started speaking, the gods used him to cause destruction to other people, their business, money, marriages and even churches. When Akwasi grew up, he went for another 70 gods making it 370. His father too has been given a new gods, anybody who will touch that gods, will go mad. One of his siblings was a christian, anytime he prays Akwasi and those who were worshiping the gods suffered a lot.

When he was 12 years old, he was given an assignment to destroy christians, he started attacking the leaders of churches by making women to become attractive to the pastor, so when he sleeps with the women, then they will conquer the whole church and destroy the members. He also make the pastor to have interest in money and wealth. Akwasi will then brings fornication, sickness, divorce, backsliding etc among the church members. He was not able to destroy christians who are devoted and always pray.

He also used ladies who likes wearing short dresses and expose their bodies to destroy a lot of marriages. During festive seasons like Christmas and Easter, they normally needs blood, so they caused a lot of accidents in order to get the blood they want. He gave an advice to all christians to worship God in truth because it not going to church alone will prevent anyone from destroying your life but being a devoted christian and also living your life according to word of God.