By Shadow (self media writer) | 1 month ago

Reports from breaking news states a gentleman who flaunt himself as a military man to be fake.

The suspected man by name Rufai Abubakar was closely monitored as he alighted from a commercial vehicle, at a bus stop and head straight to the Air force base.The guards on duty noticing his suspicious behavior, questioned him and after some incoherent behavior answers,he let the cat out of the bag,saying he was not a service personnel.

He disclosed to the guards that he posed as a Senior Military Officer to aid him defraud one man named Mr Abdallah Abdul Fatahu from whom he collected 3,000cedis, promising to recruit him into the Ghana Arm Forces (GAF). 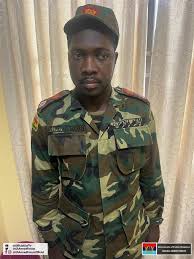 According to GAF press release statement on December 7,2022, the suspect dressed in a military camouflage uniform with fake Lieutenant Colonel ranks,claiming he was stationed at the Northern Command Headquarters and was proceeding to the Air Force Base to book a flight to Tamale.

It further went on to state that the suspect had business cards, military identifications and other documents which bears his name: where found on him during his arrest.

Reports following states, the fake military man took the Military Police officers to two residence where they discovered several certificates, documents and fake recruitment reports which bears the names of the people he has defrauded alongside with a toy pistol.

He has been handed over to the Criminal Investigations Directorate (CID) of the Ghana Police Service for further investigation and prosecution.

The suspect is said to have two wives living at Olebu and Ablekuma who believe thier husband was a real military man.

This act of the fake military man is very awkward,we can all imagine the effort he must have put into his fraudulent act to the extent of his wives not having any knowledge about his crap lifestyle