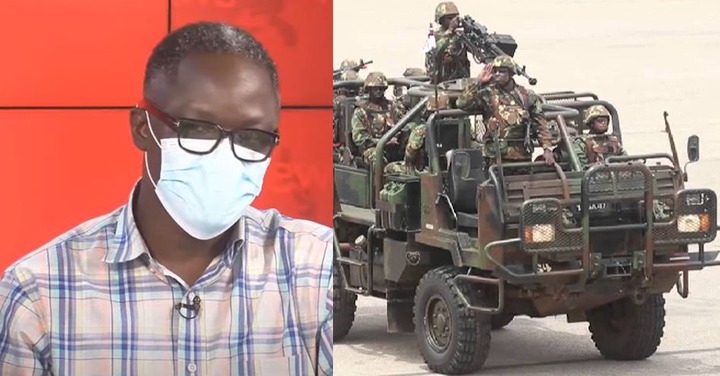 The Host of Joys News File, Sampson Lardy Anyenini has recounted how he was molested by a group of armed military men in the Ashanti Region of Ghana. According to him, he was being forced into the military armored car when his crimes had not been communicated to him.

Sampson Lardy Anyenini made the confession during an introduction of his program this Saturday, May 15, 2021. He was relating his story to what happened recently to Caleb Kudah by some officers of the National Security.

According to him, the incident happened sixteen years ago when he was assigned to cover a by-election at the Asewase Constituency of the Ashanti Region.

Sampson Lardy Anyenini reveals that there was an attempt by some group of persons to rig the election by sneaking foreign ballot papers to the collation center.

According to his account, he quickly rushed to inform the Police about the attempt and that was the beginning of his troubles.

He says the military men at the collation center at the time molested him and started giving him some slaps from the back.

“Now I can tell you when they give you those slaps, from your back, the first thing you feel very direct is in your ear. So you remember some sixteen years ago, a group of soldiers asked me to get into an armored car at the Asewase by-elections just close to the collation center. My crime was that I had blown the whistle on two pickup vehicles that were carrying foreign ballot papers. I mean there was an attempt to steal the by-elections. So I blew the whistle on those two vehicles and the police impounded them. So I got to the collation center to finish the process and the soldiers started to manhandle me”. He added.

According to Sampson Lardy Anyenini, the Military did not explain his crimes but kept pushing him forcefully into the armored vehicle. He says, it took the intervention of some colleagues and authorities before he was saved.

“I was actually on the phone reporting to the BBC and Joy at the same time. I did not understand why I was asked to get into the armored car. They won’t explain except to give me more slaps from my back. I could hear it so I know how it is to feel it in your ears. They managed to push me into the armored car but to get me in settling there was the problem because I refused to climb in there. So on that day, I remember Citi FM’s Richard Mensah got to the soldiers and asked them to stop and the Police Commander came before I was released”. Sampson Lardy Anyenini recounted.

Sampson Lardy Anyenini added that he believes the account provided by Caleb Kudah because he has led many of such cases in court where journalists give similar accounts from the hands of the National Security.