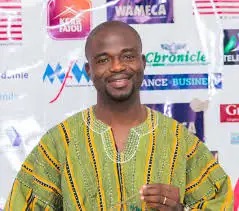 An investigate Journalist and editor in chief for the fourth Estate media, Manasseh Azure Awuni has sent another message to Ghanaians on his "stupidity" comment. Manasseh Azure Awuni in some few days now has described military brutality in the country as "stupidity" and "impunity" but Ghanaians have told him that, why should he be using such words for Ghana military and register their displeasure against him although he got some people supporting him.

The famous investigative journalist has finally come out and asked Ghanaians that if they disagree with his words used for military men who killed and brutalized Ghanaians in Ejura and Wa, then they should show him the right words to used for them.

Manasseh Azure Awuni was not silent when this military brutality and killings came. He was seen everywhere going hard on government and jabbing the military men and accusing NPP government for what happened.

""Stupidity" is a mild way to describe the killing and brutality of innocent civilians. If you disagree, show me the "right" words" he questioned Ghanaians on his social media wall today, Saturday, 3rd July, 2021.

Ghanaians in respond also replied to his message but could not expressed why they disagree with him for using "stupidity" to jabbed the killings and brutality that went on.

Someone said that: It is only in Ghana that when leaders are doing something silly you can't say it as it is because some hypocrites will be like you are desecrating our moral values.

"The insistence on the use of euphemism is part of our problems in this country. People act stupidly and foolishly and for whatever reason we are told not to brand their acts as such" another Ghanaian said.

Someone hilariously said: I strongly disagree with you Manasseh. It's not stupidity but rather stupidity plus foolishness. Thank you.

Some words are sweet but unprofitable! Some are bitter but important. First weigh your words on the counter of integrity and speak not only because your words are sweet, but because they contain the truth! Be humble, have the courage to speak and admit the truth. You were part of the people who brought this nation to its knees. I trust you won't deny it.