Soldiers Will Deal With People Who Have Excavators In Water Bodies. 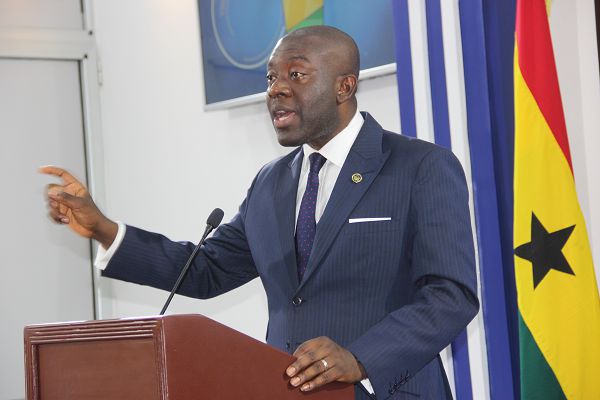 The military group set up to stop illegal small scale mining would deal with people who have excavators in water bodies, according to Information Minister Mr Kojo Oppong Nkrumah (Galamsey).

He told Dzifah Bampoh on 3FM's First Take on Tuesday, May 25, that anyone using excavators in water bodies is breaking the law.

“There is absolutely no justification to have an excavator or a changfan machine out there in any river or stream anywhere in this country for any reason,” the Ofoase Ayirebi politician added.

In a water body or hundred meters from a water body is legally a no go area for mining. As a result, all of these changfan machines that have been discovered are involved in unlawful activities. All of these excavators in bodies of water are breaking the law.

The Commander-in-Chief of the Ghana Armed Forces has directed the army to withdraw all personnel and supplies. They have their own operational procedures in place to ensure that they are removed and mobilized in that area.

So if you have an excavator or a changfan in a water body or are within a hundred meters of a water body, the troops will come because you have no right to be there.

According to reports, military personnel assaulted security personnel on the job.

They returned on Saturday, sprinkled patrol on the generator plant, and around our office facility and set fire into them.

“They burnt everything in the room including the Television set, DSTV decoder and our personal belongings,” an eye witness told journalists.

He said, “the security men were deployed by the Company to protect the site so people don’t come around to steal but they were beaten by the military with the butt of the rifles”.

Any captured illegal small scale mining (galamsey) equipment will be destroyed on-site by military officers deployed to the galamsey sites, according to Defence Minister Dominic Nituwl.

He stated that no device would be returned to Accra.

“We are not seizing any equipment, no equipment will be returned home, they will all be destroyed on-site,” he told the journalists on Friday, April 30. Nothing will return home, not even an excavator.”

About 200 officers of the Ghana Armed Forces (GAF) on Wednesday morning began an operation to forcefully remove all persons and logistics involved in illegal mining on the country’s river bodies.

Content created and supplied by: LUN360 (via Opera News )

I Am Yet To Hear One Ghanaian Celebrity Throw Their Support Behind The Arise Ghana Demo. Kevin Taylo

They Should Be Arrested: Johnnie Hughes Sends "Strong" Message To The IGP Over The Arise Gh Incident