The Battle Where Ashanti Warriors Defeated the British woefully on January 24th 1824.

The Battle of Nsamankow Where Ashanti Warriors Defeated the British on January 24th 1824. 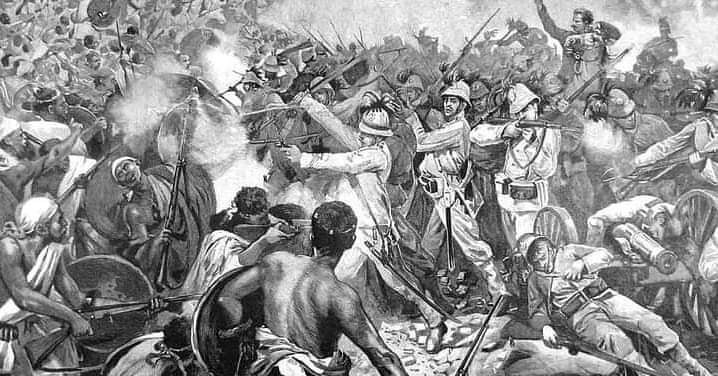 This was the 1st Anglo - Ashanti War, where The British tasted defeat.

British Governor Sir Charles MacCarthy of the Fante Region filled with pride, under estimated The Ashanti. He led a British army of 2,500 against the 10,000-man Ashanti army. The Ashanti defeated the British and their African Allies.

The British were forced to withdraw to their colony in Sierra Leone in 1828.

The 1st Anglo - Ashanti War ended in 1831, when the Ashanti accepted the Pra River as the boundary between the British-controlled Fante coastal region and the Ashanti Empire.

The Anglo-Ashanti Wars were a series of five 19th-century conflicts that took place between 1824 and 1900, between the Ashanti Empire—in the Akan interior of the Gold Coast—and Great Britain and its allies. The British lost or negotiated truces in several of these wars, with the final war resulting in British burning of Kumasi and official occupation of the Ashanti Empire in 1900. The wars were mainly due to Ashanti attempts to establish a stronghold over the coastal areas of present-day Ghana. Coastal peoples such as the Fante and the Ga came to rely on British protection against Ashanti incursions.

The immediate cause of the war happened when a group of Ashanti kidnapped and murdered an African serviceman of the Royal African Corps on 1 February 1823. A small British group was led into a trap which resulted in 10 killed, 39 wounded and a British retreat. The Ashanti tried to negotiate but the British governor, Sir Charles MacCarthy, rejected Ashanti claims to Fanti areas of the coast and resisted overtures by the Ashanti to negotiate.

MacCarthy led an invading force from the Cape Coast in two columns. The governor was in the first group of 500, which lost contact with the second column when they encountered the Ashanti army of around 10,000 on 22 January 1824, in the battle of Nsamankow. The British ran out of ammunition, suffered losses and were overrun. Almost all the British force were killed immediately while 20 managed to escape.

MacCarthy, along with the ensign and his secretary, attempted to fall back; he was wounded by gunfire, however, and killed by a second shot shortly thereafter. Ensign Wetherell was killed while trying to defend MacCarthy's body. Williams was taken prisoner for several months and on his release narrated that he was spared death when an Ashanti sub-chief recognised and spared his life due to a previous favour Williams had shown him. Williams was held prisoner for several months in a hut which also held the decapitated heads of MacCarthy and Wetherell.

MacCarthy's skull was rimmed with gold and was purportedly used as a drinking-cup by Ashanti rulers. An eye-witness stated he "saw ensign Wetherell, who appeared also to have been wounded, lying close to MacCarthy. Some of the Ashantis were attempting to cut off his head, and had already inflicted one gash on the back of his neck; luckily at this crisis an Ashanti of authority came up and recognising Williams, from whom he had received some kindness, withheld the hand of the assailant.