Security Brouhaha: Hon. Haruna Iddrisu Drops Another Bombshell On It 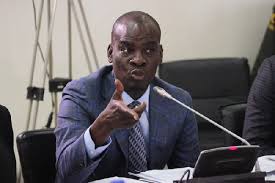 The minority leader in Parliament for the National Democratic Congress, Hon Haruna Iddrisu has dropped another bombshell on security issues in the country and cause massive stir today.

Ghanaians have keep wondering that why is it that for some past years now there is no announcement for Police recruitment unlike it is done in the past administrations? They have asked a lot of questions about it but there's no vivid response coming from government as they believe that Government is the body that can provide answers to their questions.

Today, it was reported that some "gangster" police officers are extorting money from civilians on roads and minority leader, Hon Haruna Iddrisu has dropped another bombshell on it.

According to Hon Haruna Iddrisu, NPP folks just sit at their party headquarters and dilute the police service with all manner of characters and riffraff because they know that there is no public advertisement to recruit police since 2017.

Hon Haruna Iddrisu however stated that NPP folks know that they can dilute the police because majority of them now belongs to the ruling Government and describe NPP government led by President, Nana Addo Dankwa Akufo-Addo as "kakistocracy" and said Ghanaians will forever remember this Government as a "stain on national conscience". He made a lot of accusations against NPP government and jabbed them in his message sent out to Ghanaians.

His message below on his social media wall;

Since 2017, there is no public advertisement to recruit the police and some other security personnel. The NPP just sit at their Party Headquarters and dilute the police service with all manner of characters and riffraffs majority of whom are die-hard cardbearing members of the ruling government. Merit and Qualifications for the police service has been thrown to the dogs. It is therefore no surprise that the country is in unspeakable mess relative to security. The Akufo-Addo led NPP government will forever remain a stain on our national conscience. A classic example of kakistocracy!