Do You Know The Different Ranks Of The Ghana Armed Forces? Check It Out.

By Giinagh.com (self meida writer) | 26 days

The Military ranks of Ghana are the military insignia used by the Ghana Armed Forces. Being a member of the Commonwealth of Nations, Ghana shares a rank structure similar to that of the United Kingdom.

The armed forces has different ranks. The higher the rank, the more the responsibilities and vice versa. Each individual has a responsibility to serve the nation. The Army can be sub-divided into two groups; Officers and Enlisted Officers

Officers; They act as board of directors, influencers, managers to the the Enlisted Officers.

Officers in ascending order of authority

Enlisted officers; This people take orders from the officers and act accordingly. They are nit allowed to operate on their own without being told or directed to do so.

General roles of the Army

. The Ghana army exists to serve the people of Ghana and to defend the nation.

. It is supposed to serve the national interest and to fulfil national military responsibilities.

.The Ghanaian army recruits, trains and equips soldiers who after becoming abreast with their units and joint teams, conduct prompt, sustain combat and stability operations on land.

. They are also expected to give logistics and support to civil authorities when their services are needed.

Finally, the Ghanaian is deployed for peace keeping missions, where they monitor, cease fire, help to disarm warring factions.

Now that you are acquainted with the military ranks and their duties, kindly share for others to also know. Please like and follow for more updates. Thank you 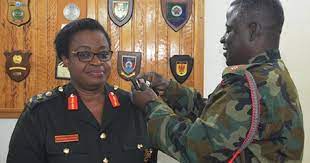 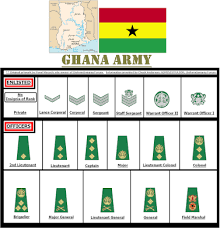