By DumeviJeorge (self media writer) | 3 months ago

I rise to ask Major-General N.P. Andoh, the Chief of Staff, General Headquarters of the Ghana Armed Forces, whether he has received a response to his letter reference number GHQ/1002/61/COS of 11th January, 2022 with a heading, ""Withdrawal of Military Personnel Attached to the Office of the Right Honourable Speaker of Parliament?"

I am asking this question because to all intents and purposes Major-General Andoh knew/knows the whereabouts of the Speaker of Parliament, and that is why he addressed a letter to the Rt. Hon. Alban Sumana Kingsford Bagbin on 11th January, 2022. 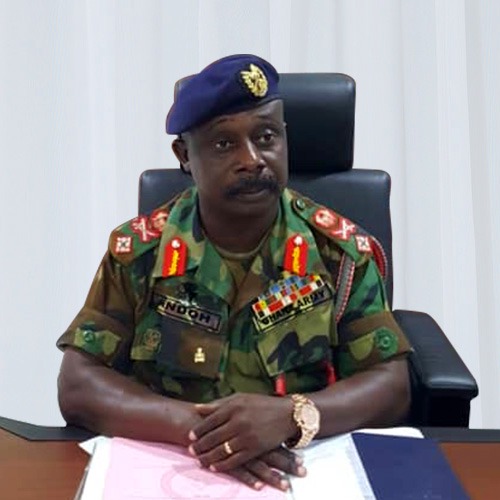 So, I am asking a supplementary question:

Major-General Andoh: Where is the Rt. Hon. Alban Bagbin, the Speaker of Parliament?

I am inclined to show some respect to General Andoh because he is a former Director-General of Defence Intelligence, and especially because of what he stated on page 19 of a brochure to commemorate the 80th birthday of Hon. Francis Poku, a former National Security Coordinator (and later Minister of National Security).

"...He has been a statesman and a patriot with distinguished record of service, loyalty, and love for our county Ghana. Even after active service, he continued to offer very cogent intelligence assessment across the broad spectrum of National Security. Indeed, he has been a veritable consultant I personally fell back on during my tenure as Chief of Defence Intelligence.

If General Andoh claims to have taken lessons from Mr. Francis Poku, the former National Security Chief, then he provokes me to raise the bar to ask further questions, as follows:

(2). If he consulted the above officials of the Executive Arm of Government, did he note a letter received from the Speaker of Parliament, reference number OP/SPKR/22/OL/87 of 6th January, 2022, with the heading, "Absence from Ghana to Undergo Medical Review in the United Arab Emirates?"

(3). Did he note what was received from the Speaker indicating that he was going to be absent from Ghana from Friday, 7th January, 2022 till Sunday, 23rd January, 2022, "in order to honour an appointment for a medical review in the United Arab Emirates?"

(4). Did he note what was received from the Speaker that "the House will resume its Sittings for the First Meeting of the Second Session of the Eighth Parliament on Tuesday, 25th January, 2022?"

(5). Did he note what was received from the Speaker that prior to "the resumption of the House, Parliament intends to undertake a Civid-19 (booster) vaccination exercise for Hon Members of Parliament and Parliamentary Service?"

As a former Chief of Defence Intelligence and a self-confessed Francis Poku trainee, if he had done due diligence, would he have written to and gotten a response from the Speaker of Parliament who had notified the Executive Arm of Government that he was going to be out of the jurisdiction as of 11th January, 2022, when General Andoh wrote and addressed his letter specifically to:

So, I repeat my questions.

(1). Major-General N.P. Andoh: Where is the Rt. Hon. Alban Bagbin, the Speaker of Parliament?

(2). Major-General Andoh: Have you received a response from the Speaker of Parliament so you could go ahead to withdraw the four (4) Military personnel with effect from 14th January, 2022?

By the way, I noted in General Andoh's letter that the Military personnel attached to the Office of the Speaker were to be withdrawn from 14th January, 2022 "whilst efforts are being made to regularize their attachments."

How does Major-General Andoh intend to regularize the attachment of the soldiers to the Speaker's office when the "sharp brains" at the National Security Ministry were quick to inform and educate Citizens of Ghana via their "Press Statement" reference number MNS/NSC/15/01/22/15 of 15th January, 2022, inter alia, "that personnel of the Ghana Armed Forces do not form part of the security detail of the Speaker and Parliament...?"

Parents of Deborah speaks in Video After she was buried.

We frown on interethnic marriages, but white women accept us - Germany based Ghanaian

Let us simply burn Sokoto down. So says the blasphemer Enenche