By African_Queen (self meida writer) | 17 days

Dr. Afaridi was a man who was suspected of having snapped or rather betrayed the Pakistani administration by demonstrating American CIA's where one of the fatal terrorists known as Osama. Afaridi was sentenced to over 33 years imprisonment by the government of the Republic of Pakistan.

In a press interview with the U.S. ambassador to Pakistan he claimed that while the U.S. government considered the Dr. a hero, the man was viewed in his own country as a menace because of their claim that he was not worthy to be a citizen of Pakistan.

In his own words, he said that although the person who does this might be regarded as one of the greatest hero ever after the tragedy of 911, when Osama was supposed to lead two of the tallest buildings, he is nothing more than a useless unworthy man for Pakistan.

The United States Ambassador in Pakistan reported that after the successful mission on which Osama Binladen was killed, the man was captured and he spends time in solitary detention, after he was immediately been detained by the Government of the Republic of Pakistan.

He would later be taken to prison, where he lives or stays away from all other prisoners, because in the reports by the Government of Pakistan, he was given a Coran, which he often read himself without any other person, including prison officers. The suspect also spends his alleged last days in jail. 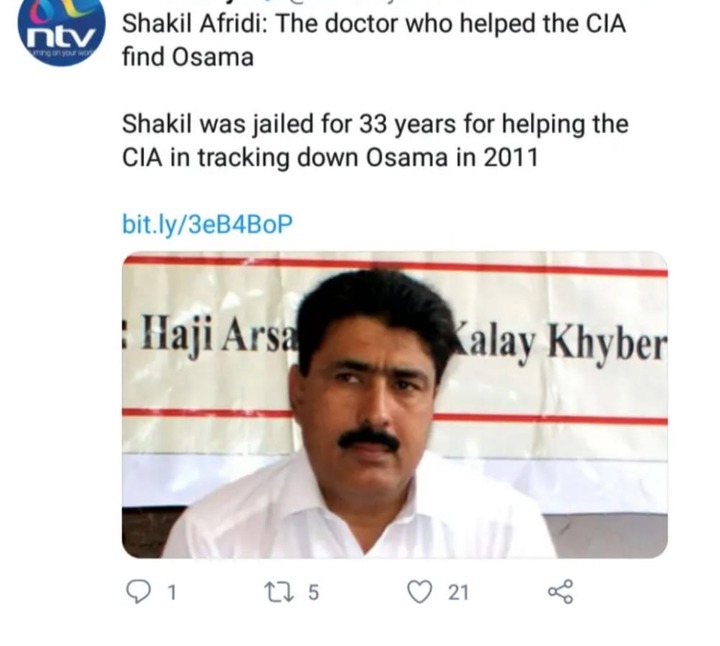 To conclude, the man who is a doctor by profession said that he brought American CIA's to show them where he was hiding and pretending he was supplying the hungry terrorist with goods. Immediately after the death of Osama, the man was jailed to give Pakistan's citizens an example of what would happen to them if they were to engage in the same act.

This event caused numerous mixed reactions from people who appeared confused about why the US didn't rescue the man that helped them captured Osama. A group of people claimed that this may be because they had no jurisdiction in Pakistan, and others went on to congratulate the man for ensuring that the victims of Osamas had justice.

Do you think he should have been rescued by American or he got what he deserved? Your opinion is important to us