The Battle Of Nsamankow: A History Of Military Misjudgment, Incompetence And Cowardice

By AlphyJebs (self media writer) | 2 years ago 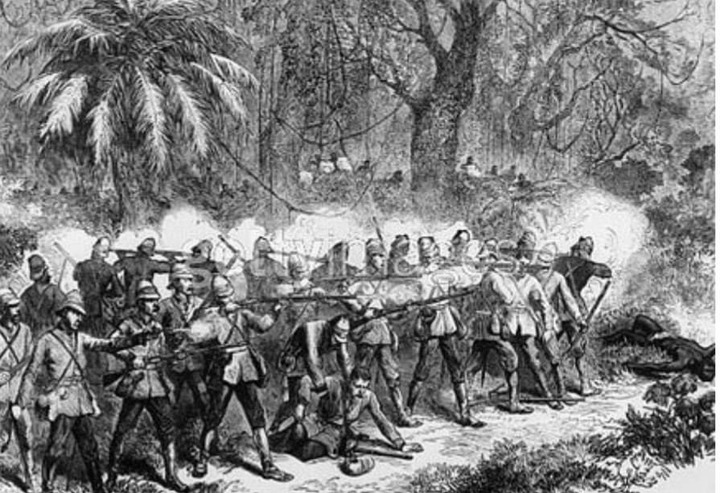 “It appears evident that though they have been blustering and threatening our forts without any just cause since last August, they were not prepared for war but depended solely upon the terror of their name to bring us to seek a compromise”– Sir Charles McCarthy; – letter to Earl Bathurst April 1823

camped by a tributary of the River Pra with only 60ft water separating the two armies, McCarthy instructed his army to play “God Save The King” loudly. The Ashanti’s responded by beating their war drums even more fiercely without let up and drawing ever closer. The Ashanti’s were busy felling trees to make a crossing over the river. The front was tense and the armies were ready to clash eye to eye, boot to boot. This was 200 years ago on February 21st, 1824.

The aforementioned reasons in the letter were some of the excuses given for the Battle of Nsamankow, the first of the many Anglo – Ashanti wars. The Ashanti had become a powerful nation to reckon with covering almost all of Ghana and extending into Cote D’Ivoire. They wanted access to the coast and control trade and this was a source of major conflict between them and the coastal states. The Ashanti was a warrior state and a great contributor of slaves to the trans-Atlantic slave trade and the British had abolished the slave trade and wanted to nip the problem at the roots. Their solution was to go to war with Ashanti and totally annihilate them.

TACTICAL MISJUDGEMENT It has been stated that McCarthy’s ambition outran his knowledge of the terrain. He was fighting jungle battle he knew little of. The weather was not favorable as it was raining incessantly at the time. He planned to attack the Ashanti in a three pronged strategy with an army total of 12000 men divided into four groups. The plan was to converge on the Ashanti’s and obliterate them with overwhelming force. Quite unfortunate for McCarthy, the plan didn’t work out as his paltry men of 600 encountered an Ashanti army of about 10,000 men. The remaining contingency didn’t show up.

INCOMPETENCE: It’s on record that McCarthy’s ordnance storekeeper was partly responsible for the British defeat at this battle. He mistakenly sent kegs of pasta to the frontline instead of ammunition. The Ashanti as their motto goes, if you “kill a thousand, a thousand more will come” proved true to their motto. The battle started with the British opening fire on the daring Ashanti soldiers trying to build a crossing over the Pra river. However, the British forces were lightly supplied; the bearers bringing the supplies up in the rear, which included most of the gunpowder and ammunition, mostly fled after hearing the firing in the distance. Four cases of supplies arrived; the first was opened and the shot inside was distributed, but the other three were found to contain only macaroni. The firing stopped at the British front as they run out of ammunition. It later dawned on the Ashanti’s that the enemy bad lost firepower and then they then decided to advance across the river.

COWARDICE: The British had some local Fanti’s as a large part of their army and the more the Ashanti’s drew closer, the faster they deserted the battlefront. The remaining few British soldiers gallantly fought with their bayonets. They were eventually overpowered and McCarthy fearing to fall into enemy hands killed himself. His body was beheaded and his head taken as a trophy to Kumasi.

Content created and supplied by: AlphyJebs (via Opera News )