I Don’t Know The Officers Who Are Burning The Excavators: Dominic Nitiwul Clears The Air 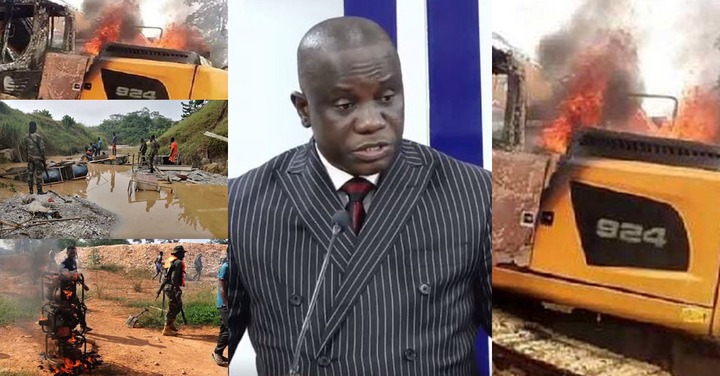 The Minister for Defense, Mr. Dominic Nitiwul has indicated that he has no idea the identity of the Armed Forces personnel burning the excavators in the country.

The minister made the remark during an update on the operation halt II aimed at clamping down on illegal miners in the country.

According to the minister, the operation is seeking to ensure every piece of equipment found within the one hundred meter zone is destroyed.

He adds that personnel selected to carry out the operation have no interests and do not know the owners of those excavators that have been burnt.

Mr. Dominic Nitiwul adds that even though he is the Minister for Defense he does not know the personnel who are currently on the field burning the excavators. He adds that the Armed Forces select the officers and nobody has influence in their choices.

He says the officers have been given an assignment and they are carrying it out without biases.

He says, the officers have a task and they are to ensure that every single excavator or illegal mining equipment that falls within the range is immobilized.

“No individual or company are targeted in this exercise. The armed forces have been given a task, they planned the execution themselves and they carry out the task. They sweep 100 meters or 150 kilometers along the river bodies. Any machine or equipment that they will be immobilized. They also make sure that those machines do not work again. If your equipment does not fall within that range, it is very difficult for the armed forces to act”. He added.

Mr. Dominic Nitiwul adds that if anyone has evidence of the officers internationally targeting anyone, the person owes it a duty to report.

“The only exception is when an individual has piped a water body to their site. As for that, they will trace it. If there is somebody who has evidence, the person has the duty to report that and the Armed Forces will take control and make sure they do their work. But no single individual is targeted and nobody has left off the hook”. Mr. Dominic Nitiwul noted.