Report coming in this evening indicates that, there was a downpour in Kumasi yesterday and this resulted in a flood washing a boy of seven (7) away and ripped off roofs from buildings as a result of strong storm, that was accompanied by the rain. 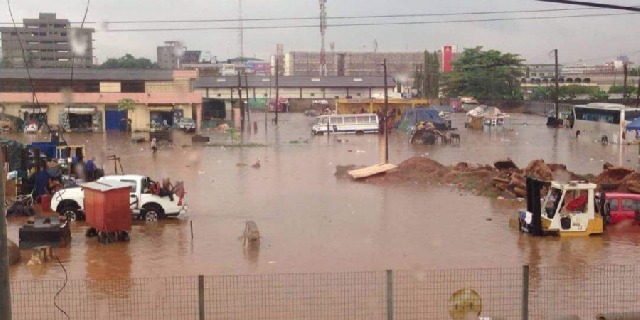 A close source said, a 7 year-old boy, whose name was given as Atta Prosper, was driven away during the rain that resulted in a flood at the Asokwa in the Kumasi Metropolis, in Ashanti Region.

It continued with a strong rain on Thursday, 24 September, 2020 at about 5:30 p.m. This rain came with a storm and destroyed many homes by getting their roofs out of their buildings in the community. It also made people left their homes due to the flooding and the strong winds.

Narrating on the story by a confirmed source from Class91.3 FM in the Kumasi metropolis in the Ashanti Region with their reporter on the situation, by name Elisha Adarkwah. This confirmation was made known in the news on Friday, 25 September, 2020.

Mr. Eric Nana Akosah, the Director of the National Disaster Management Organisation (NADMO) for the community also said, the areas that were affected with the flood included, Kaase, Ahensan, Atonsu and many other communities in the region.

He continued that, yesterday, Thursday, 24 September, 2020, in the evening, the rains came in around 5:30 p.m. to 6:00 p.m., which lasted for only thirty (30) minutes, damaged many things and caused so much destructions in the Asokwa, Atonso. This he said wasn't an easy task for the neighborhood.

The most bothering aspect was that, a 7 year-old boy child at Asokwa, called Atta Prosper, was driven away by the flood during the rain. He went out to play and couldn't return before the rain started.

His lifeless body was discovered within the shell filling station, not far from the overhead beyond the streets that lead to Anloga junction.

The NADMO Director explained that, the lifeless body of Atta Prosper, the 7 year-old boy, was then sent to the mortuary at a hospital the news couldn't confirm on.

Mr. Akosah continued with the narrations that, the NADMO company has begged the community members to desist from throwing rubbish in places and gutters, where drainage pass in order to do away with such problems, and catastrophes.

He also pleaded to the community members to desist from throwing rubbish in waters, in order to pave ways for drains to have passage during raining seasons, particularly for gutters that rain water pass through, as announcement of more rains have been reported to come.

Let us do well to practice every measures that will keep the Ghanaian communities clean so as to pave way for the rains that comes with floods.