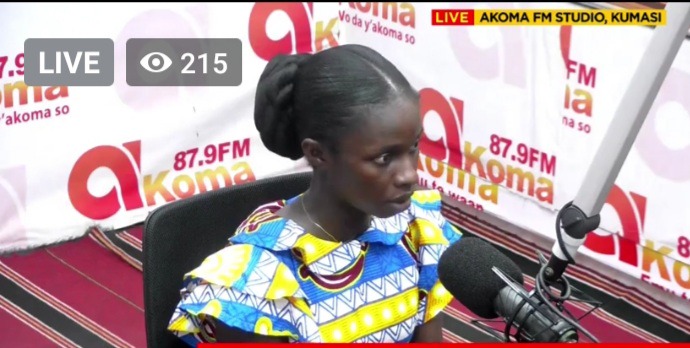 A lady well known as Mavis Tawiah from Nyankyereniase got into relationship with George Amanyo nine years ago. When she got pregnant, the man told her father that he doesn't have any family member, what he told his father made him not to allow to get married but Mavis continued staying with the man. She explained that they later found out that he is even staying with his brother.

The lady disclosed that, after she gave birth, her boyfriend started beating her when they had an issue. Sometimes her father tried to intervened but George will also beats her father too. They later moved to stay at Dunkwa but he travelled to Accra leaving her and their two children at that place. Mavis got a job doing, she called him one day and heard a lady's voice in his room.

After she got her first payment, she travelled with the children to Accra to search for her boyfriend. When she got to George's house, she found him using herbs and reciting some words, but slapped her in the process for no reason. After he finished with his recitation, he told her that he is doing those things to get money. The lady recalls that she travelled back to Kumasi after some days.

But her boyfriend did not send her any money to cater for the children.This situation made her sent the children back to him in Accra but George pleaded with her to stay with him in Accra, Mavis said she didn't agree with his decision so she came back to Kumasi. Some months later George came to where they are staying with another lady.

Mavis details that she became angry the moment she set her eyes on them because she is struggling to take care of their children meanwhile the man is dating another woman. The man calmed her down and promised to cater for the kids but he didn't fulfill his promise, she tried calling him back but his girlfriend picked up his calls and started insulted her, that lady didn't even give her the chance to speak with George.