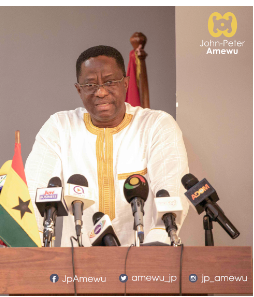 John Peter Amewu is a Ghanaian politician and Minister of Energy in Ghana. He won the 2020 Ghanaian general election parliamentary seat to represent Hohoe in the Ghana Parliament.

Quick Facts: Hon., Member of the Ghana Parliament for Hohoe ...

One Family one opportunity

John Peter Amewu was born in 1972 in Wli Todzi in the Hohoe Municipality of the Volta Region. He attended Hohoe E.P. Senior High School, St. Mary's Seminary/Senior High School, Lolobi and Adisadel College for his high school education. Amewu took a bachelor's degree from Kwame Nkrumah University of Science and Technology and then furthered his education to obtain an MBA in Finance from University of Ghana, Legon and proceeded to obtain a Post Graduate Degree in International Energy Industry Management and a Master's degree in Petroleum Law and Policy from University of Dundee (UK).

Amewu is a member of the New Patriotic Party(NPP).He was appointed by John Kufour as the Municipal Chief Executive for Hohoe Municipal Assembly, he served from 2005 to 2009. He was the party's parliamentary candidate for the 2004 and 2008 general election to contest the then Hohoe North Constituency but lost to Prince Jacob Hayibor in both contest.

On December 7, 2020, Amewu became the first New Patriotic Party {NPP} candidate to win a parliamentary election in Hohoe since 1992.