Car thief falls asleep after the operation in the car he burgled, gets caught in the morning.

By KyeretwienanaOseiBonsu (self media writer) | 13 days ago

There has been an alarming Spike in armed robbery and theft cases in general.

For many Ghanaians, burglary seems to be a normal kind of crime, as it is done clandestinely with caution and fear.

However, many dread the mention of armed robbery, as it is also carried out brazenly with a real threat of a fatal injury or death.

Theft cases have been on lips of every Ghanaian in recent times.

A day rarely passes by without a single reported case of theft or armed robbery.

The growing cases of violent crimes have put almost everybody in Ghana on the edge.

Netizens woke up today to a news many seem not to believe.

An active participant of a popular Facebook group page, 'Trotro diaries' had posted in the group that a man who had broken into his compound around 3am and stolen parts of his car, felt asleep after the operation and caught sleeping in the car in the morning after his operation.

"According to this guy,,He jump into de house around 3:30am,,and remove everything from my car but unfortunately for him,,he feel deeply asleep after his operation,,which everyone was shocked,,my co-ternant saw him around 6:30am while he's still sleeping,,,Everyday for de thief,One day for de master,,His cup don full today,,He even put banku rubber before his operation so nobody can get his fingerprints,," he posted. 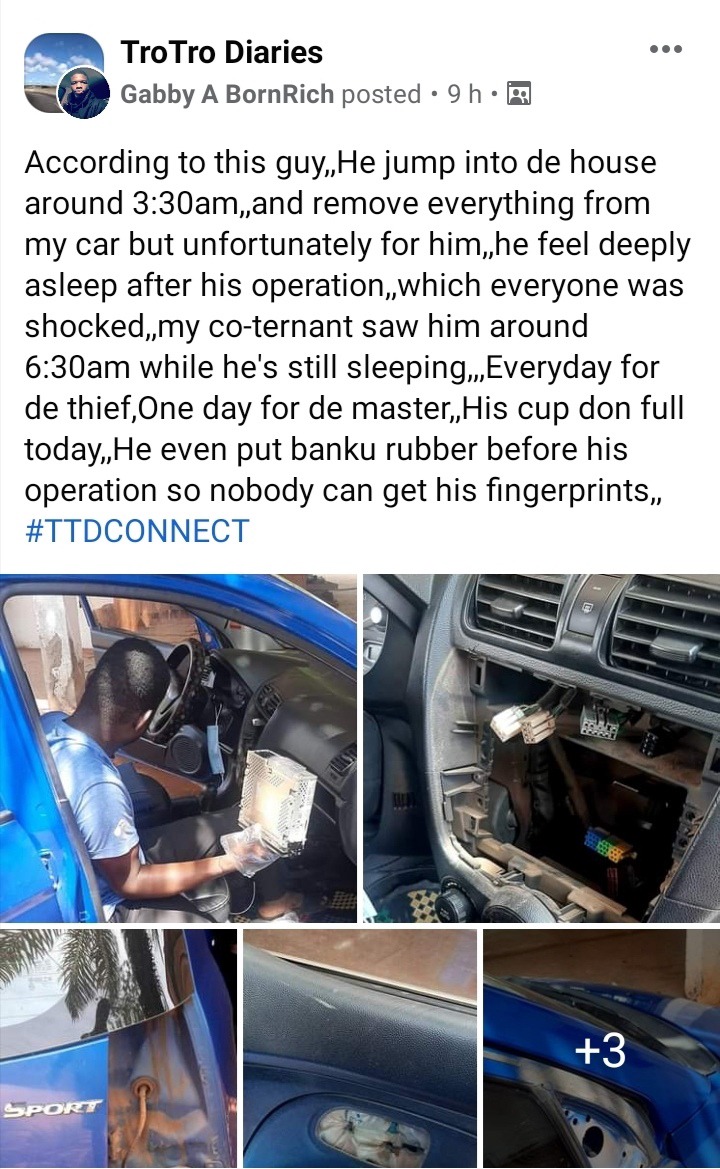 Reacting to the news, many expressed shock. Some also ascribed spiritualities because for them, the story was too mysterious to consume on its face value.

Some also recounted similar experiences suggesting that the story in its entirety could be true.

"People will always doubt it till it happens to them. My phone was stolen in Accra Central and the thieves kept calling my husband to tell me to come pick up my phone. They say the phone was haunting them. We just arranged a safe pick-up and went for it bokorrr". Sarah Ewura-ama Quarshie-Assan commented.