How a woman got swallowed by a python

By Coastofgold (self meida writer) | 8 days

Reticulated pythons are the longest living species of snakes in the world. They are constrictors, meaning they coil around their prey and squeeze them until they're dead in just a couple minutes. Swallowing their preys takes more time than killing them. Naturally,pythons normally don't attack humans. They are usually not aggressive but will bite and possibly constrict if it feels threatened, or mistakes a hand for food. While not venomous, large pythons can inflict serious injuries, sometimes requiring stitches or death.They can reach lengths of more than 10m (32ft) and are very powerful. They attack in concealed ways, wrap themselves around their preys,crush them and squeez them very tight as their preys breath out till they die of cardiac arrest which takes just some few minutes to happen.

Pythons normally swallow their food whole, lie at the same place for days waiting on what they had swallowed to digest. Their jaws are connected by very flexible ligaments so they can stretch around large preys.

A body of 54-year-old Wa Tiba was found when villagers cut open a seven-metre (23-foot) python which was found bloated in the village of Persiapan Lawela on the island of Muna, offshore of Sulawesi.

This happened afte wa had gone to visit her cornfield but never returned.her sister went out to find her and found Wa's footprints, flashlight, slippers and machete. 100 villagers from Persiapan Lawela searched the area and found a 23 foot-long snake with a very swollen belly. The villagers killed the snake, cut it open and found Wa inside intact. 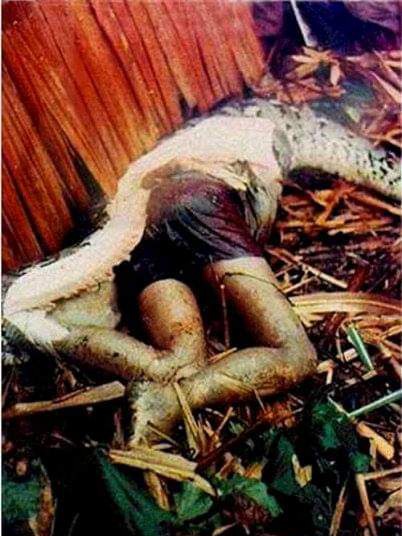 It was known that the garden in which she disappeared was at the base of a rocky cliff, pockmarked by caves, and known to be home to snakes.

Giant pythons, which regularly top six metres, are commonly found in Indonesia and the Philippines.