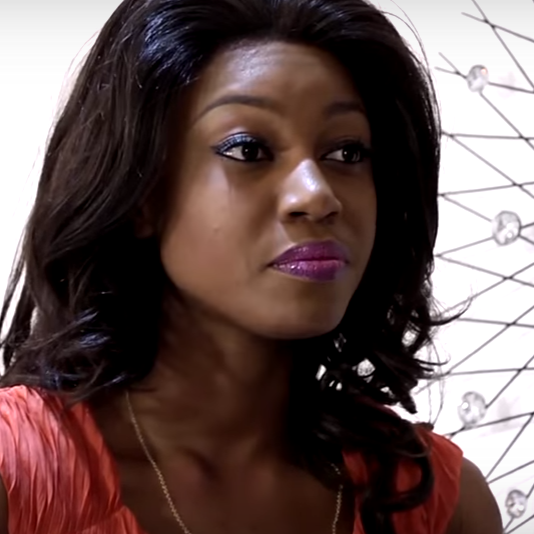 Yvonne Nelson (born November 12, 1985) is a Ghanaian actress, model, film producer and entrepreneur. She has starred in several movies, including House of Gold (2013), Any Other Monday, In April, and Swings.

Yvonne Nelson was born in Accra, Ghana. She is a descent of the Fante people and Ga people. She started her education at St. Martin De Porres School in Accra and later went to Aggrey Memorial Senior High School. She had her tertiary education at Zenith University College and Central University, where she did a degree course in human resource management. She graduated from the Ghana Institute of Management and Public Administration (GIMPA) with a Masters Degree in International Relations and Diplomacy in 2020.

Nelson, a former Miss Ghana contestant, bust onto the movie scene with big-screen roles in Princess Tyra and Playboy. She delved into movie production in 2011. Her first production was the movie The Price, which was released that year. She also produced Single and Married in 2012 and House of Gold in 2013. The latter won Best Picture at the Ghana Movie Awards and Best Ghanaian Movie at the 2013 City People Entertainment Awards.

On October 29, 2017, Nelson gave birth to her daughter Ryn Roberts with her ex-boyfriend, Jamie Roberts. The actress remained silent about rumours of her pregnancy until she announced the birth of her daughter through a WOW Magazine Cover.

Nelson founded the Yvonne Nelson Glaucoma Foundation in 2010 to help create awareness about the disease. With support from other Ghanaian celebrities, she recorded an all-star charity single and shot a video to help educate people. She also shot a video to help educate people about glaucoma. As a result of her philanthropic activities particularly in glaucoma, she was honoured by GoWoman Magazine and Printex for her foundation and film career.

In recent times,[when?] Nelson has taken it upon herself, together with other celebrities, to add more voices to the masses in protests against the energy crisis in her country. She led a peaceful vigil called DumsorMustStop on May 16, 2015. The hashtag #dumsormuststop is currently used on social media to amplify the concerns of Ghanaians about the energy crisis. Yvonne, known to be very vocal lately about political issues in the country lamented the lack of development in Ghana since the country attained her independence in 1957. She told the BBC in an interview that she may consider running for political office in the future. Actress Yvonne Nelson tweeted that she is looking forward to the day Ghanaians would refuse to vote in presidential elections to send a message to politicians.

Yvonne Nelson was awarded a special award at the "MTN Heroes of Change" in recognition of her charity work in fighting glaucoma.

Nelson has featured in over 100 movies, including:

Diary of a Player

One Night In Vegas

The passion of the Soul

The Return of Beyonce

Save The Last Kiss

Strength of a Man

To Love and Cherish

Trapped in the Game