By Allliveentnews (self meida writer) | 17 days

This world is actually not a place to put your trust in someone, because the kind of betrayal that goes on every moment is very disheartening and heart broken. Stories that pop up from places especially in Africa tells us to be careful with those we put our trust in. 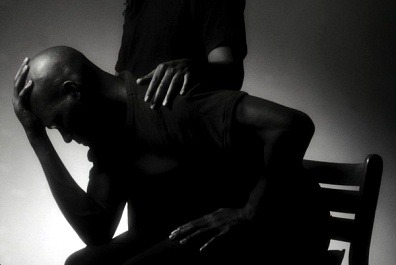 A story circulating on social media about a man who is heart broken because his three kids belongs to the pastor who actually officiated marriage is actually worrying and needs to be taken seriously.

This story was seen on a Facebook page detailing how everything happened and the man caught his wife with the pastor. The man started his story by revealing that, all the three children he believed to be his are not his but rather for his pastor and he is the same Pastor that officiated the wedding of my wife and I.

The man revealed that, his wife always tell him she is attending a Virgil at the church but she uses that opportunity to meet the pastor at a secret location.

He said he got married in one of the Pentecostals churches in Nigeria. He revealed that his wife was very close to the pastor but never thought that something of that sort was happening, besides her wife was a choir leader so it was expected.

In no time the wife gave birth to their first child, the second and the third. He noticed that the kids didn't resemble him but it was normal so he didn't bother.

He went further to make it known that, one day he decided not to allow his wife go for the virgil, her wife got angry and shouted unnecessary and that was when I found out that something was not right.

He made someone to spy on her wife after he decided to allow her to attend the virgil but little did he know that her wife was meeting with the pastor in the pastor car.

So he decided to go after her and fortunately he caught her and the said pastor having sexual intercourse in the back seat. After seeing this, I had to conduct a DNA test to find out if the kids were mine and unfortunately it was confirmed that all the three kids are the pastor's.

Below is the full story on the below Facebook page. 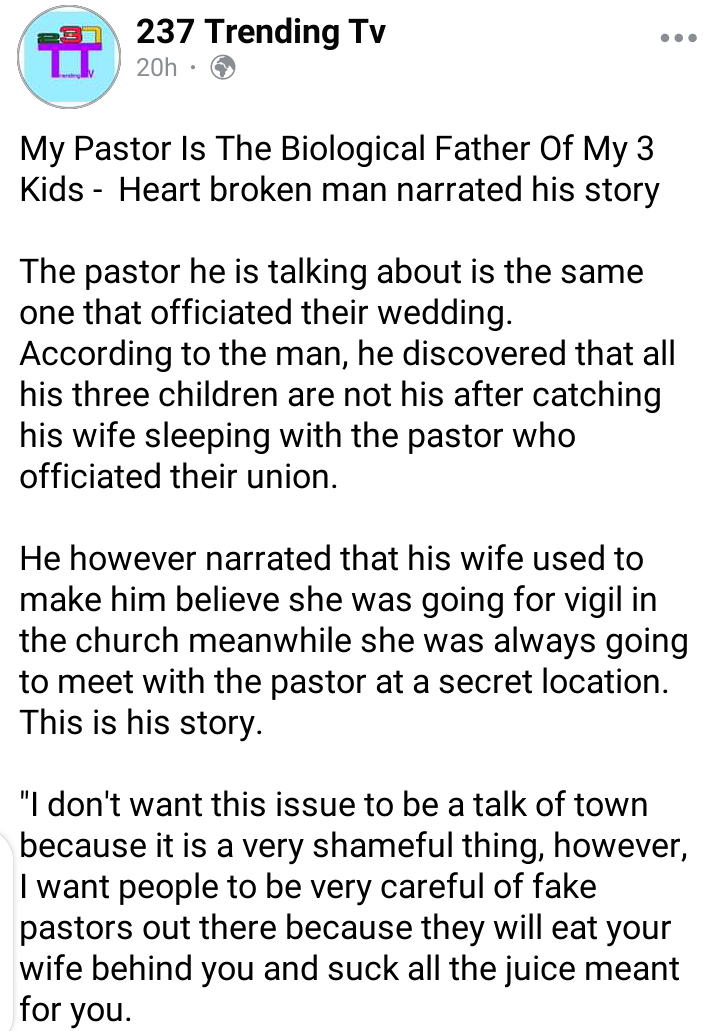 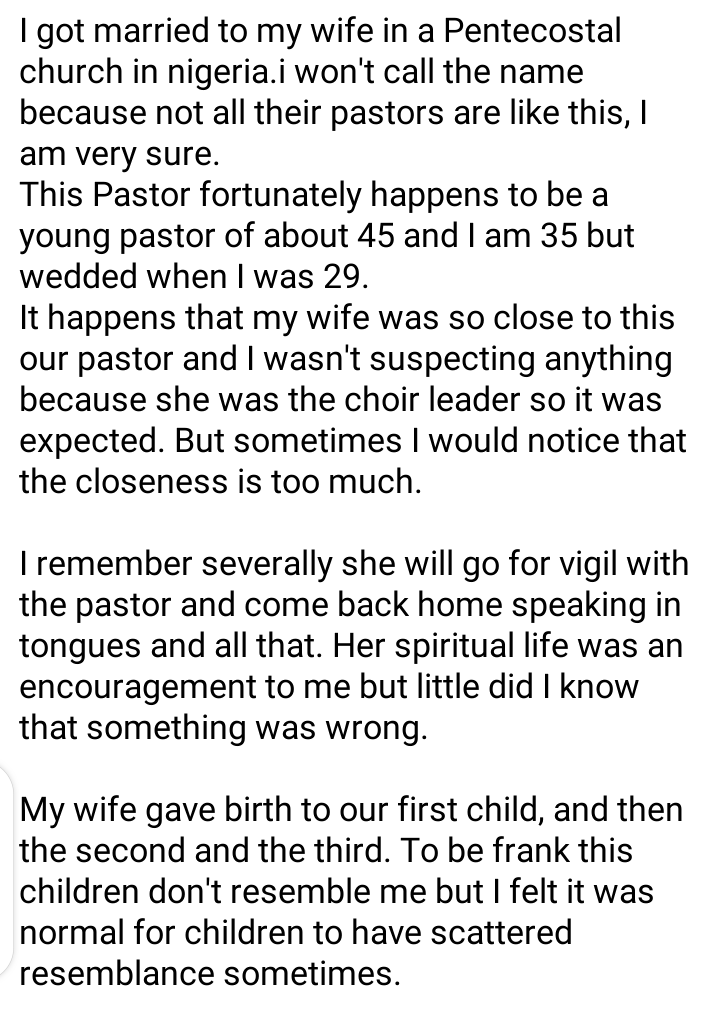 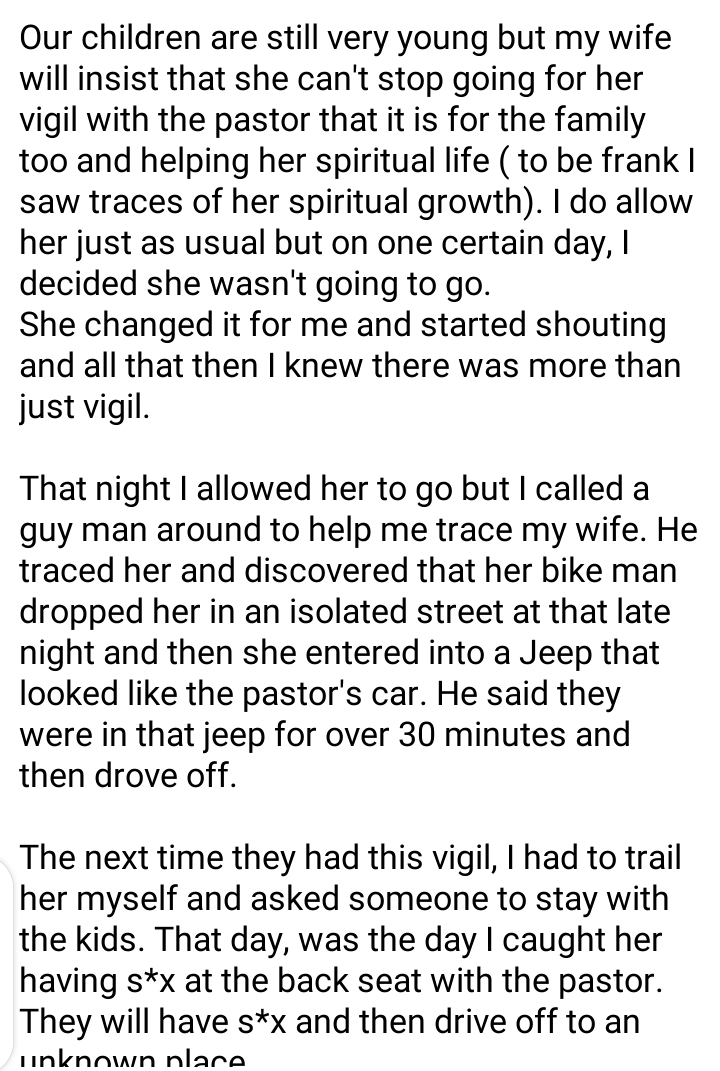 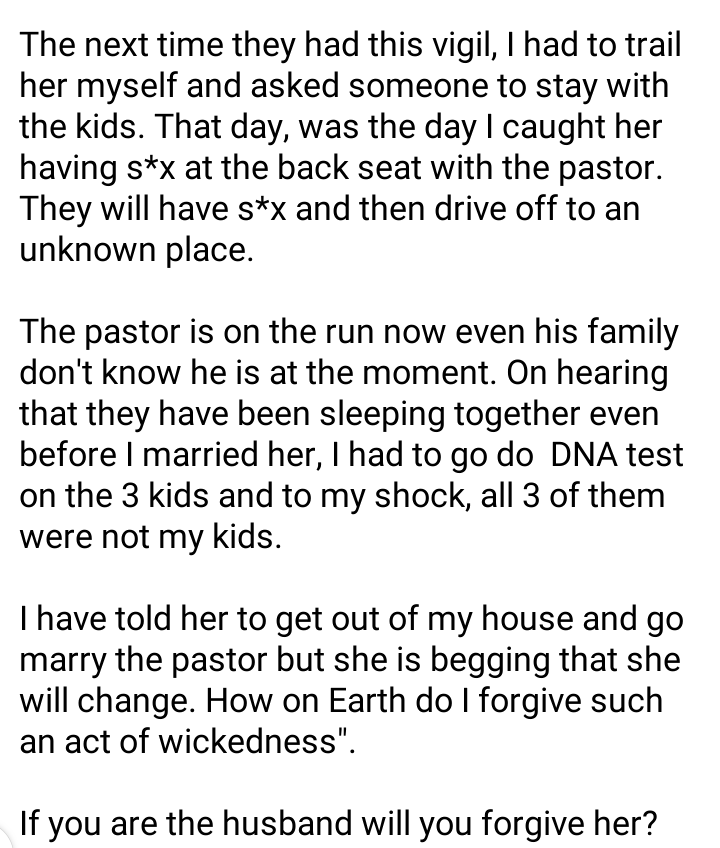