Rosemond Brown held a press conference shortly after her release from prison to thank all who had embraced her and helped her struggle for her freedom, as well as to apologize to Ghanaians as a whole, claiming that she had gone against Ghanaian culture of dignity and respect. 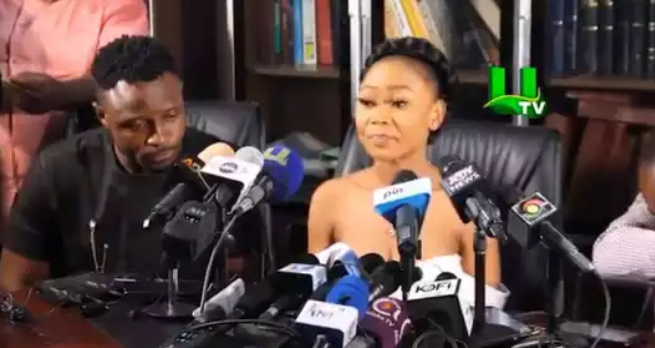 Rosemond Brown, also known as Akuapem Poloo, has become a sensation for the wrong reasons in recent weeks. Since involving a minor in an improper photoshoot session, he had to deal with legal battles.

Her sentence was reduced from a harsher one after the appeals of numerous Ghanaians, including celebrities from both within and outside the world, and she has now been granted bail.

She used the opportunity provided by the press conference to express her gratitude for the help she received from Ghanaians and to persuade them that she would never do such a thing again.

She read her appreciation and apology statements in English for viewers outside of the world, and then provided the twi translation for her native fans, friends, and family to understand. At this point, her emotions overtook her, and she began to cry. She needed to take a breather, so the press conference had to be stopped.

The press conference resumed after a minute or two as she continued her apology. She then used the opportunity to demonstrate her maturity by urging young ladies and gentlemen to refrain from public nudity and posting other inappropriate material online, whether or not a minor is involved.

She goes on to say that the act is really bad and that if she had known how bad it was, she would not have done it.

Content created and supplied by: Ama.news (via Opera News )