What does Bible Say about Fornication? 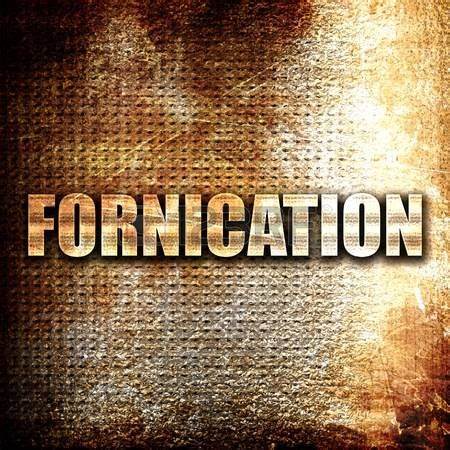 The dictionary meaning of the word "fornication" means any unlawful sexual intercourse including adultery. In the Bible the Greek definition of the word "fornication" means to commit illicit sexual intercourse. What constitutes unlawful sex? Whose laws do we live by? Worldly standards or laws many times do not always line up with the Word of God. The founding fathers of the United States established many laws that were originally based on Christian standards and the laws of the Bible. However, through time the United States has drifted far from these standards and at the present our moral standards are shocking the world. However, immorality is not only found in the U.S. but is a world-wide epidemic. Societies throughout history and around the globe have embraced sexual standards that are called sins in the Bible.

Fornication is not just tolerated in our society but is actually being encouraged. The sin of fornication is being committed even among Christians, as many couples "live together" and have sex before marriage. The Bible tells us to flee this sin. We have counseled Christians of the opposite sex who share an apartment and they told us they were not having sex so this surely wasn't wrong. The Bible declares these words in 1 Thessalonians 5:22-23:

"Abstain from all appearance of evil. And the very God of peace sanctify you wholly; and I pray God your whole spirit and soul and body be preserved blameless unto the coming of our Lord Jesus Christ."

Our lives as Christians are a living witness to others and we cannot break the laws of God without hindering others from coming to Christ. We must live our lives in purity before a sinful and wicked world. We should not be living according to their standards but according to God's standard in the Bible. No couple should live together outside the bonds of marriage.

Many say they live together before marriage to see if they are compatible as they don't want to divorce. This may sound like a justifiable reason for committing the sin of fornication, but in God's eyes it is still sin. Statistics however, show that those who live together before marriage are more likely to get a divorce than those who do not. Living together shows a total lack of trust in God and a failure to commit to Him the choosing of a mate. Christians who are living in this situation are out of the will of God and need to repent and seek God as to whether this person is the right one for them. If it is God's will for them to be together they should marry. Otherwise, they need to change their living arrangements.

As Christians, the goal of any relationship should be to cause the people in our lives to love and know the Lord better. Living together is shameful and selfish as the parties do not care what others think or how they might affect their families and others. They are living to please their own lust and selfish desires. This type of life style is destructive and especially so for children whose parents are living a bad example before them. No wonder our children are confused about right and wrong when parents degrade the sanctity of marriage by living together out of wedlock. How can living together cause children to love and honor God when their parents break the laws of God before them because they are lustful?

Young people today need to be taught to abstain from sexual intercourse and remain pure virgins before marriage. So many problems in marriages today stem from the fact that they are not virgins when they marry. Young people are bringing wounded emotions and diseased bodies into their marriages because of prior promiscuous affairs. STDs (Sexually Transmitted Diseases) are so widespread that the statistics are shocking. There are 12 million new cases of STDs annually in the United states and 67% of these occur among persons under the age of 25. In fact, every year one out of six teens contracts an STD. 100,000 to 150,000 women become infertile each year as a result of STDs.น Others endure years of pain as some of these diseases are incurable. What a tragic price to pay for sexual sins. The Bible is right when it says fornication is a sin against one's own body.

The sin of fornication is not only defined as illicit sexual intercourse between those who are not married but also is an umbrella for other sexual sins as well. The Bible also speaks of the sin of incest as fornication in 1 Corinthians 5:1:

"It is reported commonly that there is fornication among you, and such fornication as is not so much as named among the Gentiles, that one should have his father's wife."

The Bible also lists whoremongers as fornicators in Revelation 21:8:

But the fearful, and unbelieving, and the abominable, and murderers, and whoremongers, and sorcerers, and idolaters, and all liars, shall have their part in the lake which burneth with fire and brimstone: which is the second death.

All prostitutes and pimps are fornicators. Couples who just "live together" according to the Bible, are committing the same sin that whores commit. Singles who "make love" fall into the same category. Just because society has accepted this type of living does not make it right. The Bible must be our standard of what is right and wrong. We must change our standards if we do not want the wrath of God to fall on us. God hates sin but He loves the sinner. If anyone repents and calls on Jesus today He will help them to come out of any illicit relationship and heal them of all past hurts and even heal any disease that they may have contracted.

God gave us the laws in the Bible for our good. They are not meant to deny us any good thing but they are given so we can enjoy the proper sexual relationship in the proper time. If we obey the words of the Bible and "flee fornication" and glorify God in our bodies, the Lord will bless us beyond what we could believe.

Psalm 145:17-21: "The LORD is righteous in all his ways, and holy in all his works. The LORD is nigh unto all them that call upon him, to all that call upon him in truth. He will fulfil the desire of them that fear him: he also will hear their cry, and will save them. The LORD preserveth all them that love him: but all the wicked will he destroy. My mouth shall speak the praise of the LORD: and let all flesh bless his holy name for ever and ever."