How Could You Disappointed Us Like This? - Ghanaians React To The Resignation Of Okudzeto Ablakwa

By GhanaNsem | self meida writer
Published 12 days ago - 2294 views

Yesterday, the news of the resignation of Hon. Samuel Okudzeto Ablakwa from the appointment committee of parliament was trending all over the media platforms, as Ghanaians discussed the perceived cause of his resignation. Some politicians including Ras. Mubarak and Koku Anyidoho have commented on this issue, they said that, there is something wrong with the leadership of the minority group, NDC in parliament, which needs to be resolved by the party leaders. Kelvin Taylor also commented that, Ghanaians are now seeing, what Sammy Gyamfi was trying to tell the minority leadership in parliament with his letter, which was deemed disrespectful. Yesterday, Samuel Okudzeto posted on his Twitter page that, the speaker of parliament has agreed to his discussion to resign from the committee. 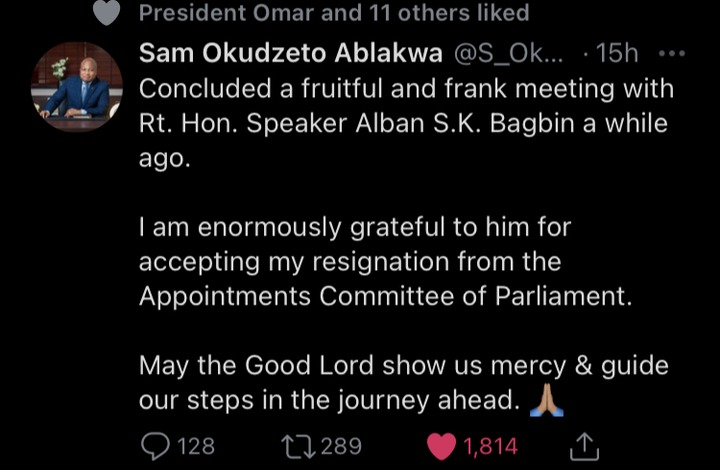 His tweet generated a lot of comments from his followers, where some wrote that, it is good that he has resigned, but they are very disappointed in him, because they expected much from him after the NDC lost their Supreme Court case. Others also claimed that, his resignation was empty, he should have made the reasons why he resigned known to Ghanaians, while some fans praised him for not going the corruption way, since a good name is better than riches.

What do you think of the points raised by these people and also the resignation of Hon. Okudzeto Ablakwa? Let’s keep the conversation on going in the comments section below.