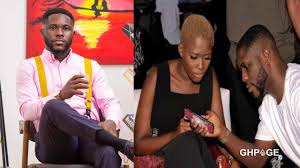 Richmond Amofah popularly known as Richie known to be the Manager of the wife of Ghanaian Rapper Medikal has made a shocking Revelation about how his relationship went wrong.

According to him, his girlfriend left him all because of his relationship as a manager to fella Makafui.

Further in his statement, he added that, he was positive on that side and never thought of having any affairs with fella Makafui unlike other managers do by capitalizing on being a manger to a female Artist to sexually assault them but the girlfriend on the other side was not on the same page with him.

He further explained that, as all mangers will do, he always calls to check up on Fella Makafui. The girlfriend discovering that became suspicious suspecting him that be in a serious relationship with Makafui aside he being a manager to her so she out of jealousy stepped out the relationship to find for herself another guy.

"It so hard to have a stable relationship sometimes when you manage a female Artist since the other sex will always stay suspicious", he lamented.

He made this Revelation speaking in an exclusive Interview with Rashid on GhPage Tv.

He further hit on why Fella Makafui sometimes show sensitive parts in most of his post and according to him, they use that to get the mass talking though she is married but has gotten a limit. They won't take it far to get her marriage shaken and that, they try to stay in the limit.