By [email protected] (self media writer) | 10 days ago 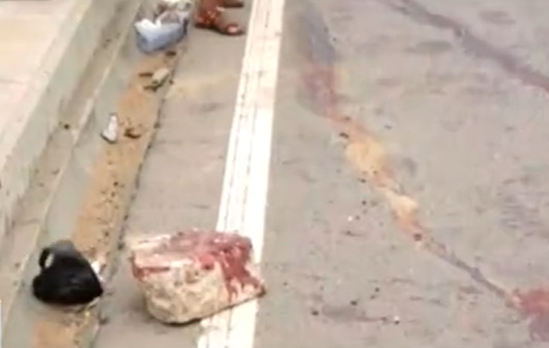 The mentally ill woman who killed a young guy by being stoned to death at Accra's Kwame Nkrumah Circle has been ordered by the Kaneshie District Court to be transferred to a psychiatric hospital for evaluation and treatment.

According to reports, the victim was killed after being struck by a large stone thrown by the suspect, who has yet to provide any explanation for her actions.

The family of the dead has identified him as Kwabena Amoani, 25, according to Chief Superintendent Maxwell Agyemang, the commander of the Nima District Police, who spoke exclusively with GBC News.

He claimed that on Monday about 3 p.m., the Command received a distress call regarding the occurrence and sent a Patrol Team to the area.

Upon arriving on the scene, the team discovered Amoani lying in a pool of blood.

An examination of Amoani revealed that the left side of his face and head had been severely fractured, according to Chief Superintendent Agyemang. He was taken urgently to the Police Hospital, where doctors immediately declared him dead. Since then, his body has been placed in the mortuary at the Police Hospital for preservation and autopsy.

Kindly share your thoughts on this article with us in the comments section below.

Don’t forget to like and share this article with your friends and family so that we know their individual opinions and thoughts on this article.

Please follow us so that you don’t miss any of our newly published articles.