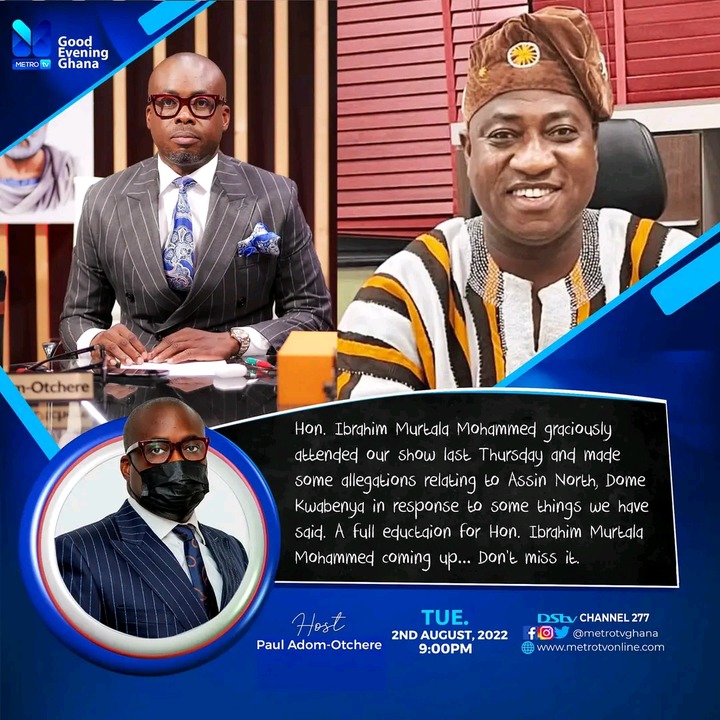 Yesterday was one of the interesting nights on Good Evening Ghana as Paul Adom Otchere took an hour to deliver a touchscreen analysis on Murtala Mohammed. According to Paul, he feels offended that Murtala Mohammed came to his studio last week and made some uneducated comments and tried to degrade his show.

Well, Murtala Mohammed has responded to the emphatic analysis done on him. While on The BIG Issue on TV3’s New Day, Murtala threw caution to the wind as he blasted Paul Adom Otchere. At one point Berla Mundi had to disassociate herself and Media General from the comments that Murtala was throwing. According to Murtala he still insists that the Good Evening Ghana show is irrelevant with a paid government journalist playing host.

Murtala threw a challenge to Paul Adom Otchere to invite him to the studio if he had the balls. Murtala noted that he is ready for the next show if Paul will invite him. the next show will be on Thursday. Interestingly, Murtala raised a number of issues and told Berla Mundi that he is surprised Paul will create a flyer and put up his photo without informing him. He added that he even asked for a slot on last night show but was denied.

“I laughed while watching his show. I saw a frustrated journalist. How can you do a flyer with my poster without telling me? I called the producer to ask why they didn’t invite me to the programme? They even spelt Education wrong. Paul’s programme is a debased programme. He tried to mock that I am a teacher, “Murtala said.

According to Murtala he has never said he is a lawyer. He noted that he is in his final year doing his PhD in Political Science. He boldly insisted that Paul and his team had to beg him last week to attend his show and yet when he went Paul Adom wasn’t in the studio.

It will be interesting to see if Paul will heed to the challenge and have a one on one debate with Murtala Mohammed. It doesn’t look plausible because tempers are high and Murtala might just verbally wallop Paul in his own studio. Time will tell if Thursday’s show will see both communicators coming head to head. For now, the challenge is on.