The Presidential Spouses Allowance: Everything You Need to Know

Some Ghanaians have expressed their displeasure with the announcement that the President's and Vice President's spouses will receive enhanced allowances, particularly on social media. These allowances will put even more weight on already beleaguered taxpayers. They contend that politicians' spouses should not be paid by the state.

This tendency, according to Ofoase-Ayirebi, is not new and has existed since the presidency of President John Agyekum Kuffour.Mr Oppong Nkrumah said that under an arrangement put in place by former President John Agyekum Kufuor when he took office in 2000, wives of presidents and vice presidents have received allowances since then, despite the fact that there was no formal documentation to back it up.

The truth is that all current and former heads of state's surviving spouses have always earned a salary. Since President Kufuor's reign, Lordina Mahama, Naadu Mills, Matilda Amissah-Arthur, Nana Konadu Agyeman Rawlings, Faustina Acheampong, and Fulera Liman have all received wages.What has now happened is that the arrangement has been formalized, but this was done legally based on the Emoluments Committee's recommendation,” the Information Minister stated. 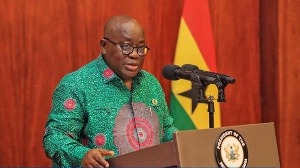 Content created and supplied by: steven? (via Opera News )