Video: Update On The 18-Year-Old Boy Who Has Been Pregnant For 3 Years.

By SamColeNews (self meida writer) | 22 days

The mysteries of life will forever remain unanswerable facts to humanity but the ability to embrace and live with an unbearable situation is long-suffering. This is the update of the 18-year-old boy called Thomas who has been pregnant for 3 years, and his condition has limited his ability to do anything in society. Meet Thomas, the boy whose story shocked everyone.

Florence, who is a mother to Thomas tells her son's story; It all began when Thomas was 15 years old. His body mysteriously started misbehaving which made his belly started swelling and all wondered what was happening to him. This was a tragedy to me because when his problem started, my husband died a few weeks after. I could not imagine the pain and the suffering that was coming.

It became a headache for me since I was not working and did not know how I was going to manage to take care of my son's situation. I took Thomas to the hospital, but his treatment was very expensive for a mother whose husband had died and her son in a terrible situation. I had no option other than to sell the house that we were living in for his treatment because his life was more important.

For some time, the money I got from selling the house was able to cater for his treatment but later, I completely ran out of money. My son was going through serious pain because of his belly. He had a sleepless night and a lot of fear of getting out of this house. Going to society was a very big problem for Thomas because the people within our community kept staring at him and others laughed at him as the boy with pregnancy. This built a lot of negativity into him.

We all thought Thomas was suffering from a disorder known as ascites which is an accumulation of fluid in the belly as a result of liver malfunctioning and the hospital was the only way to go for treatment. I took him again to the hospital for manual excretion of the fluid but the more they did, the bigger his belly became. I was always living in fear that my son's belly would explode one day and end his life.

I started digging in people's farm for money so that I could get something little to cover up some of the cost of his treatment. Sometimes, we could not eat at all because I believed that I had to save every coin that I got to keep my son alive. Getting money for my son treatment seemed impossible since I worked for only a dollar per day which I got from digging.

The first time the doctors removed some of the liquid from my son's belly, they removed 8 litres of it and I wondered why he did not remove all. He told me my son would have died immediately If he removed all. Before my son Thomas was born, I had given birth to three children but unfortunately, they all died mysteriously, and the only one I have now is Thomas who is facing this terrible situation that might also end his life soon.

My son was in school before all this happened but now, he cannot go to school anymore because of his condition. His belly has become too heavy which affect his breathing sometimes and makes him tired always.

All hope was lost and did not know what to do. Living my son to die would also be a catastrophic situation that would ever happen to me in my life. As I was in my time of distress and agony, I received a call from a doctor who heard my story and was touched to help my son. He gave me an appointment to come with my son so that he would carry the necessary test to find out what was wrong with him.

When the day was due for the appointment, we went to the hospital where the doctor had called us from and surprisingly, he was an Indian. Though I was a bit afraid of what was going to be carried out. He carried out the test and his results showed that Thomas is having a heart problem that had accumulated fluid in his belly. He said that removing all the fluid would cost Thomas' life, so he gave us some medication that will remove the fluid slowly, and he would be fine. 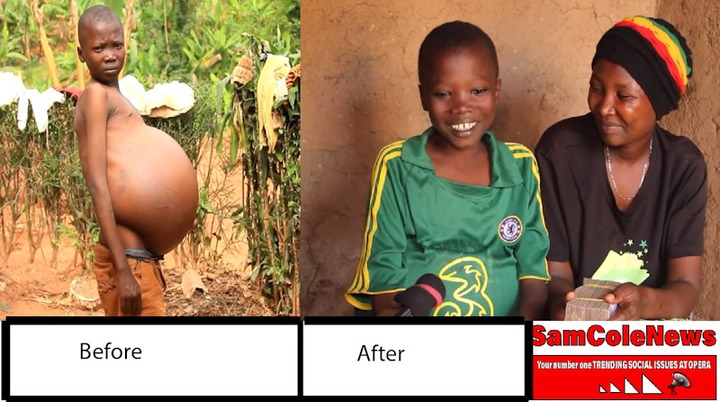 Slowly by sure, Thomas condition is improving, and he has also got a lot of support from people to go back to school again when he is completely well.

This is the story of the update of the 18-year-old boy who has been pregnant for 3 years.