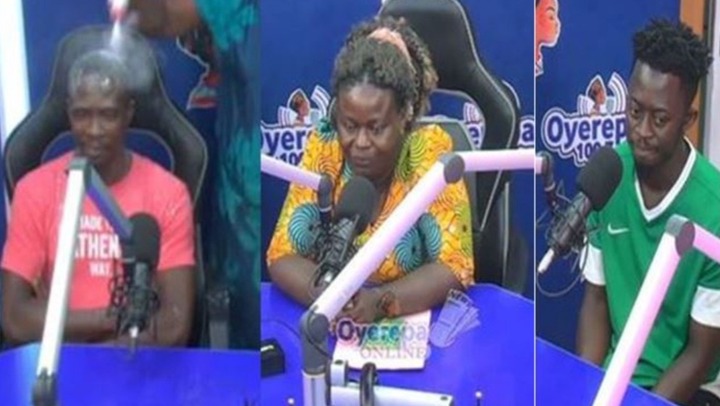 Sara Kyerewaa, a resident of Atimatim in the Kwabre East Municipal of the Ashanti region, was revealed by her boyfriend's family as a cheating wife who has been demanding a piece of her husband's property.

On Oyerepa Afutuo on Thursday, Sara Kyerewaa accused her husband, George Opoku, of marrying another woman.

During the episode, she stated that she helped her husband build two houses on all levels, and that if he is cheating on her, she wants a share of the property.

"I was married for eight years to George Opoku. We constructed two houses together, but he has moved on with another woman, so I'm claiming my part of the property." Sara informed Aunty Naana ,host of the show.

Sara cheated on him, according to George Opoku, who also appeared on the show, and she left the marriage because of her late boyfriend (Richard), who had arrived from abroad.

"My wife (Sara Kyerewaa) quit the marriage and returned my Schnapp to me as per protocol. It's been almost five years. As compensation, I created an electrical shop worth GHc 80,000, but she spent the money and the business failed," George revealed.

George went on to say that his wife wants to claim a home for which she never paid a dime because her boga fiancé died.

Sara, on the other hand, denied cheating on her spouse.

"I've never dated a 'Boga,' he's merely a regular visitor to my shop." I had no sexual relations with him. Sara categorically denied it.

Unfortunately for Sara, her late boyfriend's younger brother walked into the studio and refuted Sara's assertions that she was not seeing his late brother.

"I work at Adum here, but my mother summoned me to Oyerepa since my sister Sara is visiting." Sara, my late brother's sister, is someone I know (Richard). "She stayed with the family till my late brother's funeral," he revealed.

Sara came to them (her late fiancé's family) and said that their brother owed her money, according to the young guy. Ghc2000 has been paid out of it. Sara's family is unaware of her marriage, he claims.

"Aunty Naa, it's true I dated the boga, but I was embarrassed to admit it at first." "I'm sorry for lying to you...please forgive me," Sarah begged pathetically.

Watch video via this link