By CapHelps (self media writer) | 1 month ago

+ Some armed men have made away with an amount of GH¢20,000.00 after robbing a woman at Achimota Old Station

“The thieves bolted from the scene after the woman handed over

the cash she had withdrawn from the bank 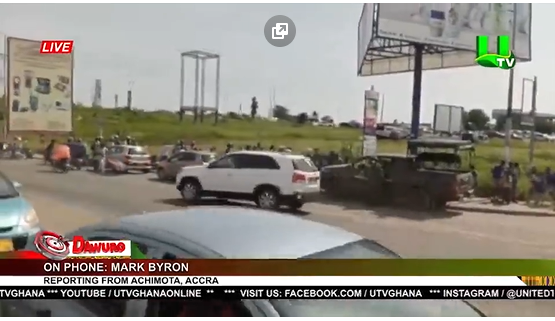 A motor rider has been shot by robbers who attacked a woman at Achimota Old Station around midday, on Monday, September 20,2021

Reporting from the scene of the incident, Mark Bryon of UTV narrated that the robbers who were on a motorbike trailed the woman from the Universal Merchant Bank, Abeka Branch where she had withdrawn an amount of GH¢20,000.00 and robbed her.

According to the reporter, the robbers in the act demanding the money from the woman who was driving in her car mistook an

oncoming motor rider for a police officer and shot at him, For fear of getting the motor rider who was shot for the second time

killed amid warming shots, the woman handed over the money to the robbers who then bolted on their motorbike from the scene

team around the area arrived on the scene but met the absence of the thieves.

from the event. Watch The Video Here

Listen to Mark Bryon’s report from the scene below:

Content created and supplied by: CapHelps (via Opera News )