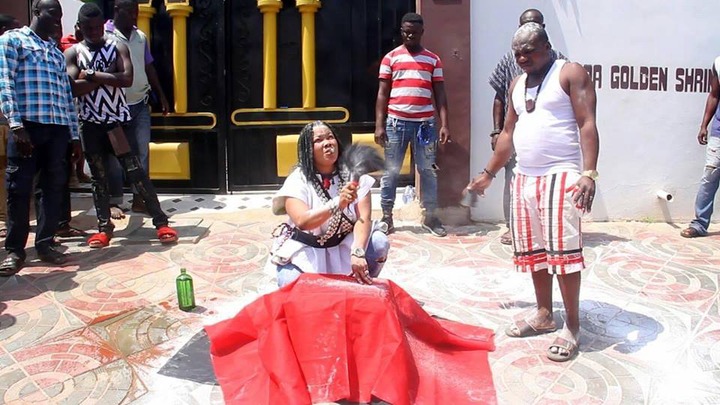 Self-Styled fetish priestess, Patience Asiedu, who is also known as Nana Agradaa has found herself in another big trouble that may send her to jail.

Nana Agradaa has constantly been in the news for several reasons. Her controversial style of approaching issues has made her one of the personalities constantly being discussed in the media domain.

She was recently in the news with Reverend Obofuor for a banter which has since gone viral. On many occasions, Nana Agradaa has been captured on live television promising to double money for interested individuals who visit her shrine.

She has also been promising to provide money rituals for interested individuals. Most of her victims have complained of swindling them of their hard-earned monies without returning the promise of making them rich.

Most Ghanaians have asked for the law-enforcing agencies to clamp down on other fetish priests who also engage in money rituals on national television.

But it seems Nana Agradaa’s time is up. Her two television stations, ICE TV and Thunder TV have all been shut down in a recent swoop by joint security forces from the National Communications Authority and the Police.

Information has it that, some equipment in the two television stations have all been seized. It is also alleged that Nana Agradaa has been arrested for some offenses, including operating with an expired license.

According to the National Communications Authority, the license of Nana Agradaa expired on February 26, 2020. Several written directives from the NCA to seize operations have proven unsuccessful.

If Nana Agradaa has indeed been arrested, then she must be prepared to face possible jail terms. Regulation 65(5) of the regulation of electronic communications 2011, LI, 1991, states clearly that a person cannot operate a frequency without authorization.

This is another situation that can lead to Nana Agradaa being sent to jail.

The swoop is coming at a time when two teenagers have been arrested at Kasoa for killing a friend for a money ritual. They are said to have gotten their inspiration from one of the television stations.