The Central Regional Police Command has captured 340 presumed hoodlums, including five females, at Buduburam, Adade, Akwele, Ofaakor and CP in the Awutu Senya East Municipality of the Central Region. 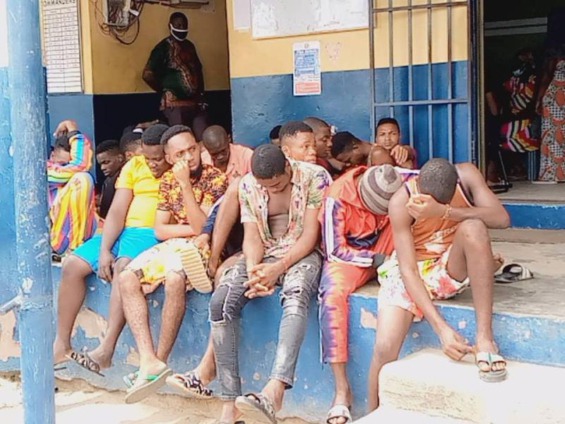 The police discovered amounts of dried leaves suspected to be cannabis on nine suspects and recovered from others 142 cell phones, 245 PCs, and six Nigerian international IDs.

The Police, who captured suspects, in a sunrise dive on Wednesday, would as a team with the Ghana Immigration Service, screen them and those found to have repudiated the law would be examined and charged at the law court.

The unique activity attempted by the Police shapes some portion of endeavors to clasp down on criminal operations around there.

This comes in the midst of the declaration of a feeling of frailty among certain inhabitants, whining that the crime percentage in the Municipality was rising.

Additionally, a week ago, 30 individuals were captured at Ofaakor, close to Kasoa around there, while two individuals purportedly connected to past violations were likewise gotten up and Kasoa Estates last Tuesday.

At a media preparation on Thursday, Deputy Commissioner of Police (DCP), Habiba Twimasi, emphasized their obligation to follow lawbreakers threatening honest individuals, adding that, they were resolved to make Kasoa and the entire district an off limits territory for reprobates.

The Region stayed cool and serene with officials' supreme polished skill and obligation to obligation, regardless of the new capture of scores of crooks, she said.

She said the Police would seek after hoodlums to their lairs, adding that, "crooks would have no spot to stow away".

She guaranteed of escalated "police battle" against wrongdoing, as a team with sister security administrations, by taking the battle to the doorsteps of all hoodlums through generally, the usage of police knowledge in their tasks.

These remember searches and dives for the networks.

The Regional Commander said considering the expanded crimes around there, the Police had set up severe intercessions, including makeshift camps to be mounted inside networks in Kasoa.

Additionally, the Command in a joint effort with assessment pioneers had shaped local area watch boards of trustees, while media and local area commitment were progressing.

DCOP Twimasi energized the help, everything being equal, and helped them to remember their community duty to chip in ideal and precise data to the law authorizing offices to free the district of every single social reprobate.

"The Command is indeed reminding the overall population that their collaboration is genuinely necessary. They should impart data to the police on our social responsibility named," If you see something, say something," the Regional Commander said.