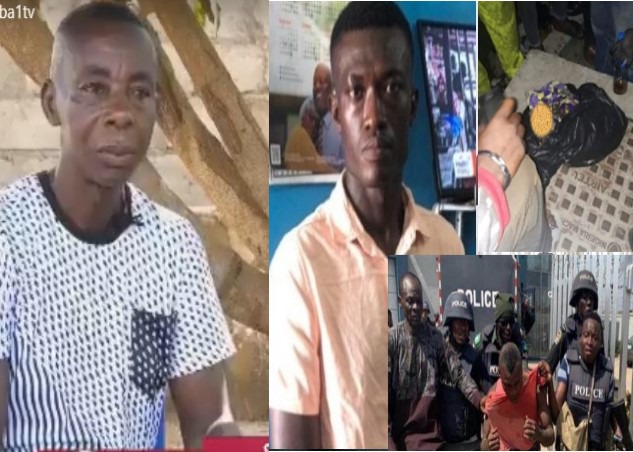 An account by Agya Yeboah, the father of little Stephen Sarpong who was murdered by Richard Appiah has given some troubling account of how a step brother was gruesomely murdered by the suspect. According to him that the step brother whose name was given as Atta, was found dead in a locked self-contain apartment at Richard’s house after days of searching.

Richard Appiah is said to have been found with the step brother on Friday around 3pm walking towards his house. No one could confirm his return from the house of the suspect. The suspect according to the account denied on several occasions no knowing where the kid might have left to after he allegedly sent him off to the parent’s house.

Agya Yeboah mentioned that the mother and step father were not suspicious of Richard until one man asked them to cause his arrest overs some strong suspicion, he had in the suspect’s response about the whereabout of the ‘missing’ Stephen Sarpong. The man [name withheld] whispered to the mother about his suspicion and asked that they lure him to the police let he might escape when they hasten with any accusations against him.

The mother, step father, Richard and some relatives who had joined the search walked into the main town to make a public announcement on the local information system about the missing kid. The mother smartly impressed on Richard that there would be a need to file an official report at the police station given that the kid had gone missing for six days.

Without any knowledge of what was hatched against him, Richard joined them, still acting innocent to the police station. It was then, according to Agya Yeboah that the mother signaled to the police to detain Richard.

The step father who wanted to confirm his suspicion, went along with some other men to break into Richard’s house. They search every single space available but found nothing.

But there was one room which was locked. They tried to break in but the locks were strong, so they went to the back and peeped through the window.

Agya Yeboah disclosed that the step father managed to tear the net on the window so they could throw a flash light into the dark room. To their utmost surprise, the body of his the step brother was lied on the ground with blood oozing from it.

Watch the interview via this link; https://youtu.be/15Uxg-p6zts