The police have dropped new update concerning the robbery incident which happened few days ago at Anlo-Afiadenyigba, Volta region. The police launched a massive manhunt for the suspects after a complaint was lodged that they have attacked a company and shot through a vehicle. The police allied with some people in the town and arrested five suspects on Sunday night namely, Haruna Toboloka aged 36, Akwesi Owusu aged 18, Famous Normesi 29, Luton Eric aged 32 and Korku Ahazi aged 39. However the new update from the Volta region police says, five more suspects have been arrested, and two of them are workers of the company the robbers robbed. The police withheld the names the duo, citing the nature of the investigation as a reason. Meanwhile two among these five suspects are Ahazi Anane aged 26 and Ahazi Kwame aged 33, who were reportedly contemplating to fleeing to Togo. 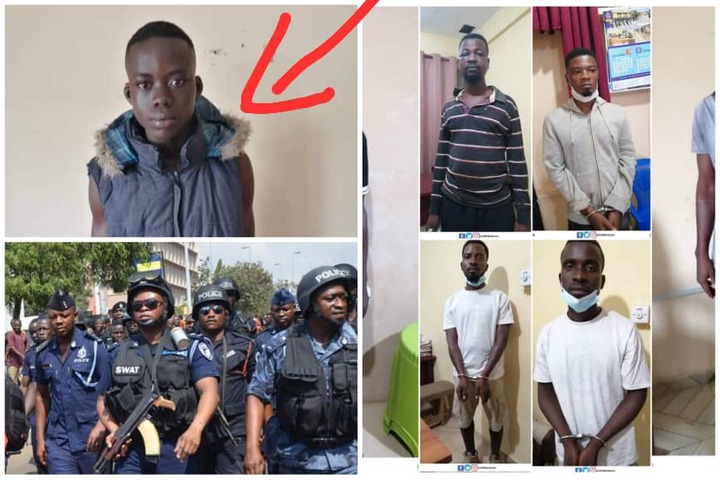 However netizens were left perplexed after seeing the youngest suspect involved in the robbery. Akwesi Owusu is just 18 years of age according to the police reports, and it is just unfathomable to see such a young person pursue no other job than armed robbery and put his future at risk. Have a look at the reactions from netizens.

Fast forward the police revealed they have encountered situations where employees conspire with some criminals to rob the companies they work. Therefore the police entreats entrepreneurs to be circumspect and screen job applicants thoroughly so they don't fall victim.

Meanwhile the Volta region police team have assured civilians in the jurisdictions that, they will continue to work assiduously to improve security in the region. The police also entreats civilians to countenance their efforts by reporting suspected people as they perform their constitutional mandate of maintaining law and order.