The 80s Ritual Murders And Rawlings’ Response Could Be A Solution To Recent Cases; IGP Must Know 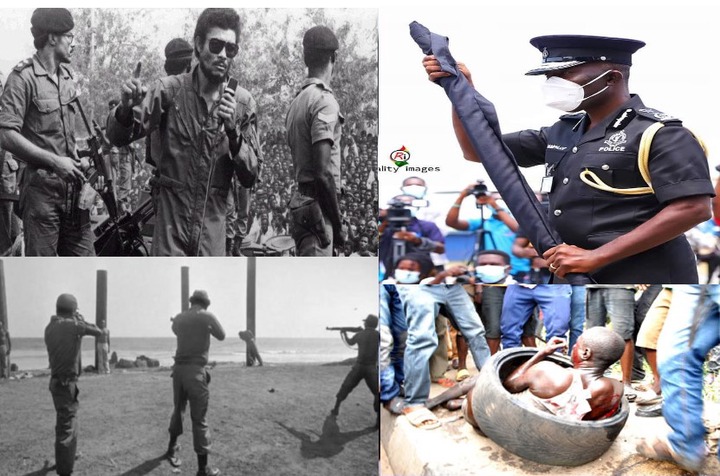 Flight Lieutenant Jerry John Rawlings managed to set an example of ritual murderers in Ghana, in the 1980s by ordering the killing of suspects who had been tried at the Public Tribunal. A death sentence was the punishment, though brute it was a desperate measure to put an end to a growing and terrific situation that has engulfed the communities in the Volta Region and Sefwi areas of the Western Region.

This account has been captured in Prof. Ahwoi’s ‘Working With Rawlings’ book. The late president was provoked by the gruesome murder of Kofi Kyinto who was lured by his uncle Benjamin Affi, a 28-year-old farmer of Sefwi Bekwai. The boy [Kofi Kyinto] was beheaded by contract killers under the instructions of Nana Akwasi Agyei of Akaasu. All the culprits were arrested and executed in their communities by the orders of Rawlings to serve as a deterrent.

Before then, other killings had plunged the Sefwi Bekwai into a cursed land, with several people getting beheaded for rituals. Fifteen-year-old Kwame Kaya was beheaded at Baakrom, a village near Sefwi Bekwai. He had gone missing for days only to have his lifeless body in a bush. The incident was reported in January 1981.

The same year in November another headless body was found at the outskirts of Sefwi Bekwai. Nine-year-old Kwasi Gymah was the victim.

Three years later [November 1984], just when the community was healing from the horrors of these murders, a 65-year-old palm wine tapper, Kwaku Nkrumah was found headless in the bush. A search had gone throughout his site and the forest when news broke that he was missing. It took the Asafo to uncover the body which was laid in the bush.

And there are more that did not even get to public records. Initially, the victims were foreigners or visitors of the community, until it escalated leaving homes of the indigenous people mourning for their lost souls. The execution of the suspects managed to trigger some fear among these ritualists.

It took the conscientious effort of the traditional authorities and the Asafo (warriors) to rid their village of these criminals.

Today such horrors are being visited on Ghanaians in the Kasoa and Sunyani areas, leaving about five victims recorded so far. In the Assin areas too, residents are getting apprehensive over such ritual killings and missing people.

As people learn about the crimes committed by these suspects, what comes is suggested as a punishment is a public execution. Rawlings’ methodology is given prominence as a panacea to the crisis. The Inspector-General of Police Dr. Geroge Akuffo Dampare is exhausting every lead to get to the bottom of these killings. He suspects there is a network that is fueling these crimes.

As investigations unfold, the IGP has been challenged to get his prosecutors file before the judges a strong argument to have these suspects face the toughest punishment of their lives. This would mean a life sentence or execution by hanging. But do our laws permit this?

Let’s have a conversation.