By JibrielIsmail (self meida writer) | 26 days

Sources at the club say they expecting things to be speed once EURO 2020 and Copa America end, while they are also studying other ways to reduce the wage bill. 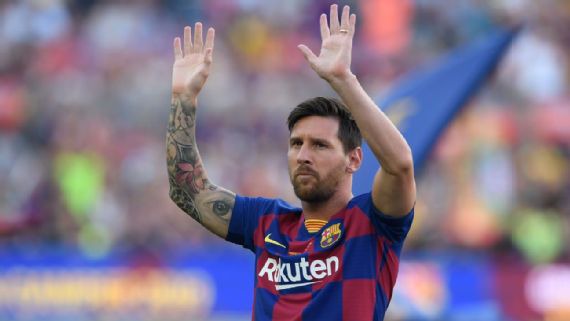 Any money F.C Barcelona bring in from transfers could also help increase their salary cap for next season.

Messi's last four-year deal which expired on June 30th,was worth over €500m ($594m) combining signing on fees, his salary, bonuses and image rights.

Barca cannot afford to pay him at the same rate and are exploring ways to compensate him over a longer length of time to ensure he doesn't have to take too big a pay cut.

Options include continuing to pay him in an ambassadorial role if he chooses to leave Barca for Major League Soccer in a couple of years, as he's expressed he would like to, and the chance to return to the club after that in a backroom role.

Messi was first officially registered as a Barcelona player 20 years ago, in 2001, since then he has always been contracted to the club.

He asked to leave last summer but was told no, by then President Josep Maria Bartomeu, Since then, Juan Laporta has replaced Bartomeu and ESPN explained on Wednesday that Messi, as a result, has grown open to extending his stay at Camp Nou.

Manchester City and Paris Saint-German have been following the situation over the past six months, but neither look set to make a serious play for the Argentina International.

However, the significance of Messi becoming a free agent did not go unnoticed, with former club Newell's Old Boys inviting him back on social media, while Brazilian Minnows Ibis Sport Club promise him "the worst time in the world" if he joins them.

La Liga President Javier Tebas has warned the Catalan club they must make cutbacks to be able to register new Messi deal ahead of next season.

"We want him to stay and Leo wants to stay; everything is on track;"

Content created and supplied by: JibrielIsmail (via Opera News )