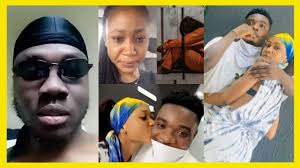 Ghanaian Musician and a former AMG member, Sam Safo known popularly by the stage name Showboy who is currently serving a 6 year Jail term in the USA has come out with words of caution to Akuapem Poloo over her claims of being in relationship with AMG singed rapper, Armani.

Armani in response to her claims came out to rabish all that she said further denying of being in relationship with Akuapem Poloo. According to him, he had nothing to do with Akuapem Poloo further stating that, he is not a kind who does things just for clout so fans should eliminate that from their mind. He after his reaction hit back at Akuapem Poloo as he warns her to delete all the photos from her page for it posing threatd on his relationship.

Reacting to this, showboy all the way from US has come out to make shocking revelation about AMG Armani which further warned Akuapem Poloo to step out any relationship she has with him. The Musician speaking in a viral video revealed that, AMG Armani is known with fraud records further tagging him as a fraudster. He further alleged that, she is going to be arrested together with AMG Armani if she continues to be in relationship with him.