By RockyJDJones (self media writer) | 10 days ago

Veronica Kumboa, the divorced wife of Austin Kumboa, an Excavator Operator, will have to either put her differences with her ex-husband aside and defend him as the father of her children or support her family to punish him for his reckless actions that have rendered their family house useless, bystanders said as they watched with vigour, on how the Oyoko Family of Asante Nyanboo will treat the man who once insulted the entire family during his divorce with their daughter, Veronica. Kumboa had met his metre today, this family will destroy him, they won't even remember the good he has done for them before, Alhaji Musah said when he heard of the accident. 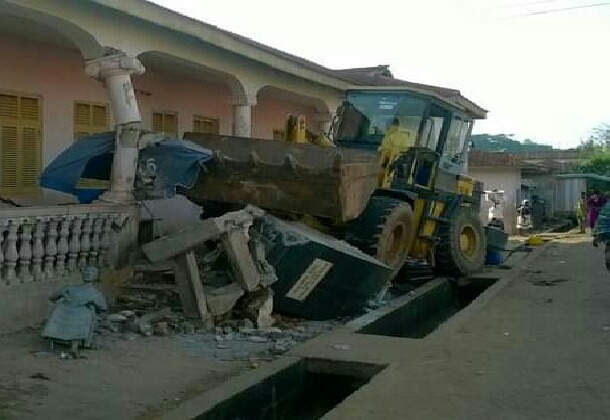 This won't just be a test of anger, payback and humour, Achia, the younger sister of Veronica said as he called her mother to intervene before the Nyaboo Police arrival. Kumboa Austin had been held on his grounds by the angry Oyoko family for plugging an excavator bucket into their family house, destroying over half of the building's front elevation.

I am sorry, Kumboa pleaed with the angry family members as they kept him from fleeing from the scenes. Kumboa would have not run away because of this, we are all one people in this town and there is no way a man will run away, abandon his children and life all because of a small mistake, the Excavator owner, Alhaji Musah stated as he defended his employee Austin Kumboa after his accident. 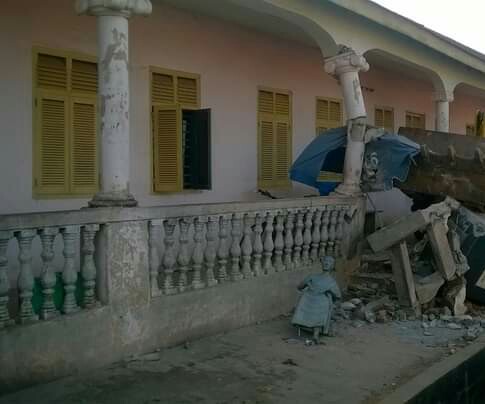 Kumboa in his statement to the Nyaboo Police after the Oyoko family handed him to them, stated that, it was not deliberate that, he will drive an excavator into the house of his ex-wife. I won't get anything from it, it won't give me anything, the man said as the police pushed him behind bars.

Achia Asamoah, the younger sister of Veronica Kumboa, the woman whose ex-husband is in trouble, confirmed that she was standing at the porch of the house when he saw Kumboa, the ex-husband of her sister driving the heavy-duty excavator in a zigzag motion. He was sleeping, if he wasn't, there is no way he would have been able to drive recklessly like that, Achia said as she narrated her side of the story to the police.

Despite Achia, confirming to the Nyaboo Police of the accident, the Oyoko family has still insisted that, it was deliberate and Kumboa might have done that to pay them back over his divorce proceedings with their daughter Veronica. Veronica and Kumboa had a roughed marriage that lasted four years, and it was at that marriage, Veronica was said to have tolerated her family in her house more than she treated her husband's family. 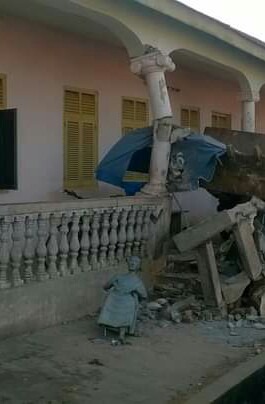 Because of such preferential treatment Veronica gave to her family with Kumboa's finances, Kumboa was expecting the family to be more easy and fair in their divorce hearings but the Oyoko family stood high behind their daughter Veronica and that made Kumboa rained series of hurtful words on them. You are ingrates, if not, you would have remembered what I have done for you. Such ingrates deserve to die a painful death, Kumboa was alleged to have said to his in-laws during his divorce.

It is with that insults, the family is holding him accountable over this minor accident, if not, why would anyone hurt their in-laws, Alhaji Musah questioned as he blamed the family for acting unfairly in the accident. The family is seeking not less than GH¢66,000 to renovate the damaged parts of the house claiming the accident has caused series of cracks in the house and needs total renovation.