By EMPIRENEWSS (self meida writer) | 28 days

In an accident corncerning a long trailer, a white sprinter and a yellow hundai ,three confirm dead ,others injured as trotro van runs into stationary cargo car at Tesano,, infront of De-Georgia, Papaye Restaurant area this morning. We work up this morning just to hear another dreadful accidents that has led to loosing four lives due to the overspeeding of our drivers, 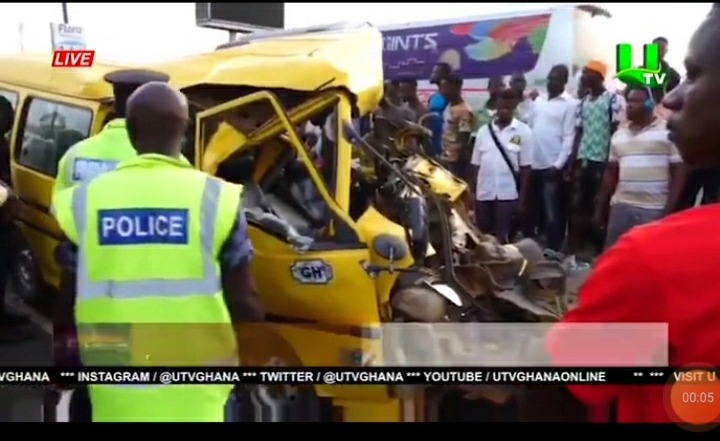 According to a video sighted on UTV Ghana news this morning has confirmed an accident at Tesano, infront of De-Georgia, around Papaye Restaurant early this morning leaving four dead.

According to a report reported on phone by Anim Addo who was reporting live from the place of the accident indicates that, a trailer from Togo loaded with Onion got spoilt on the left lane of the road, leaving the other two lanes because it is a three lane road,

Unfortunately a hundai yellow passenger car with registration number GS 5366-18, it was suggested that the hundai driver was on over speed and he unexpectedly realised that the long trailer was not moving but rather packed, but due to the over speeding involve he wasn’t able to swerve the trailer but rather than run into the trailer.

The yellow hundai car is dismantled to the extend that a towing car was called to pull it out before the National Fire Service Of Ghana workers were able to remove the bodies, and the car from Togo towed by the police from the seen. It is confirmed that the yellow van was loaded with plantain,yam other things. The driver of the yellow hundai and other three people lost their lives.

Content created and supplied by: EMPIRENEWSS (via Opera News )