The Historical Relation Between Asante Juaben And New Juaben (Koforidua) 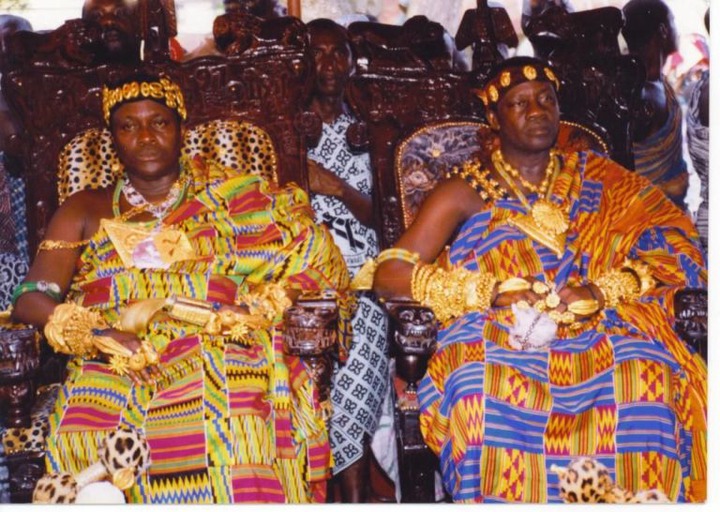 Today, we dive deeper into the historical account of the relationship between Asante Juaben and New Juaben.

When Osei Tutu I became the first Asantehene (Monarch of Asante). Chief Priest, Okomfo Anokye provided the religious and spiritual underpinning/glue of the new Asante nation by commanding the “Sikadwa” (Golden Stool) from the sky to serve as the unifying agent and symbol of authority for the new Nation. Thus, was born the Three (3) Asante Trinity: Sikadwa; Asantehene, and Asanteman.

Juaben is a member of the Asante matri-clan called Oyoko, members of which also includes Kumasi, Kokofu, Bekwai, Nsuta (Adako), and others. Indeed, The Chief of Juaben is considered the head of all the Oyoko Abusua (family) in Asante. It is therefore regrettable, that Juaben and Kumasi have not enjoyed peaceful relations in the past.

Juaben and Kumasi’s relations began on the wrong foot when Nana Juabenhene Adaakwa Yiadom who fought brilliantly in the Asante-Denkyira War, was accused of not surrendering the gold artifacts and emblems captured at Abankeseɛso from Denkyira to Asanteman.

It was Asante’s custom for Chiefs to surrender war booty to Asantehene who would then give a portion to the victorious Chiefs. According to Asante tradition and lore, Okomfo Anokye caused an ant to enter Nana Juabenhene’s inner ear during a grand durbar of Asante Chiefs, creating an embarrassing situation for Nana Juabenhene. He, however, did not return the alleged gold in his possession.

Then, in 1826, Asante went to war against the Europeans on the coast; Britain, Denmark, Holland, and their African allies for the control of the coastal areas of modern-day Ghana. This was the Akatamanso War of 1826, known as the Second Anglo-Asante War…as British Historians put it.

It was a total defeat for Asante. It resulted in the 1831 Treaty whereby Asante gave up any control/influence over the coastal areas. The British turned those areas into the British Protected Territories of the Gold Coast, the forerunner to the Gold Coast of 1874…post-Sagrenti War.

Significant for our topic here, is that, in the heat of battle, on August 7, 1826, in the confusion, the Golden Stool was temporarily abandoned, and got into the possession of the enemy.

Instinctively, Antwi Panin, the Chief of Kuntenase mounted a recovery team to retrieve the Golden Stool. He was joined by Juabenhene Daasebre Kwasi Boateng, they succeeded in recovering the stool from the enemy who as was reported, were “gazing at it frightfully,” unable to comprehend what it was…”

According to W. Walton Claridge’s book “A History of the Gold Coast and Ashanti,” published in 1885,” based on interactions and interviews with people who took part in that war. The two Asante Chiefs received a great ovation when they returned with the Golden Stool.

The Juabenhene was accorded the accolade “OWOROKOMA,” that is, one upon whom the nation depends to fight in the heat of battle, the dependable one in battle. Nana Antwi Panin, the Kuntenasehene, received thirty-nine bullet shots, but he survived the ordeal and so that earned him the accolade “OGYEABUO”, that, is, he who receives, yet, repulses bullets.

The Juabenhene surrendered the Stool to Asantehene Osei Yaw Akoto on Asante territory in the ancient town of Sewua. Again, the Asantehene and Kumasi Abrempong accused Nana Juabenhene of keeping to himself, a box containing gold dust. The desecration of “Sikadwa” is an unspeakable crime,to which Juabenhene Akwasi Boateng took serious offense, and vehemently denied.

Matters came to a head-on when both the Juabenhene and Asantehene supported rival candidates in the succession to the Nsuta Stool following the death of Nsutahene Yaw Osekyere (Yaw Sekyere), who died on the battlefield at Akatamanso War.

The upshot was that the candidate supported by Juabenhene were murdered in cold blood on their way to Kumasi, and up to date, nobody knows who committed such an unspeakable crime. Nana Juabenhene was peeved at what he described as treachery and accused Kumasi, he never forgot that.

So, when a bosom friend of Juabenhene by the name of Kotiako, sought asylum in Kumasi after he was accused by a wife of Juabenhene for taking liberties with Juabenhene’s wives, added fire to the already tense situation.

The Kotiako case also led the Juabenhene to declare, after Kumasi forces lined up against Juaben, “Sɛ brebre amma a, anka amaneɛ nso amma, Kotiako na me ne no wo asɛm….” is the immediate cause for the war between Juaben and Kumasi, that led to the 1832 migration of mainly Juaben people to Akyem Abuakwa.

However, after the death of Osei Yaw Akoto, the Juaben people returned after being assured of peaceful relations by the new Asantehene Kwaku Dua Agyeman.

Juabenhene Kwasi Boateng died at Saman near Osino, and his brother, Kofi Boateng who succeeded him, died eighty days after enstoolment. Therefore, the Juaben people were led on their return by Queen Amma Serwaa (Juaben Serwaa) who ruled concurrently as Juabenhene. There were no male heirs left. Much of the Juaben royal family members had died at Juaben during the Juaben-Kumasi War.

Nana Amma Serwaa was succeeded in 1846, by her daughter Ohemaa Afrakoma II a.k.a Afrakoma Panin. She was succeeded by her daughter Akua Sarpomaa. Nana Akua Sarpomaa’s husband (Agyei Twum, son of Juabenhene Kwasi Boateng) a.k.a Asafo Agyei of the Asona Clan later became Juabenhene much to the opposition and consternation of fellow Oyoko clan members in Kumasi, Nsuta, Kokofu and elsewhere.

Juabenhene Asafo Agyei proved to be singularly cantankerous and anti-Kumasi. No wonder then, that Juaben withheld support from Asante during the Sagrenti War in 1873-1874. Asafo Agyei wanted British support to fight Kumasi. Thus, ensued what is known in Asante as “Asafo Agyei Ko” in 1875, Kumasi-Juaben War again. After this war, Asafo Agyei led Juaben out of Asante. This time, in 1875, other towns such as Afigyase (Effiduasi), Asokore, Oyoko, etc, joined in the migration.

Through the efforts of Akyem Abuakwahene Nana Amoako Atta I, the government secured land from the Kukurantumihene. The new settlement became what is known as NEW JUABEN (Koforidua); Effiduase, Asokore, Oyoko, Jumapo, etc in the Eastern Region.

Koforidua was built from scratch and became the capital of the new region, the Eastern Region. Something Okomfo Anokye prophesied in 1701 that: “wherever Asante goes, it will shine”.

Even the British were concerned about Asafo Agyei’s rabid anti-Asante stance. In 1880 he was exiled to Lagos, Nigeria. He died there.

Until 1898 a triumvir consisting of Acheampong Kwasi, Okyere, and Asafo Boateng managed the affairs of New Juaben State on behalf of Princess Ama Serwaa. In October 1901 Ama Serwaa left Koforidua for Asante Juaben. In her absence, Chiefs Okyere and Asafo Boateng acted as caretakers.

In June 1907 the Chiefs of New Juaben elected Asafo Boateng as their head, and petitioned the colonial government for his formal recognition as Omanhene of New Juaben. In Asante Juaben, the young teenager Yaw Sarpong became Juabenhene.

Some of the Juaben immigrants also founded towns such as

Enyiresi, Kankang, Asaaman, etc, in Akyem Abuakwa itself. These towns owed allegiance to Juaben. In the 1920s, Akyem Abuakwahene Ofori Atta I appealed to the British colonial government to change that. Allegiance of the Juaben towns in Akyem Abuakwa and Akyem Kotoku were then transferred to the respective paramount chiefs.

New Juaben does not swear allegiance to Otumfuo Asantehene. As we say in Asante, New Juabenhene ‘di ne nkui.”

As New Juabenhene and hemaa goes home today, we wish them eternal peace and eternal rest in the world of their ancestors.