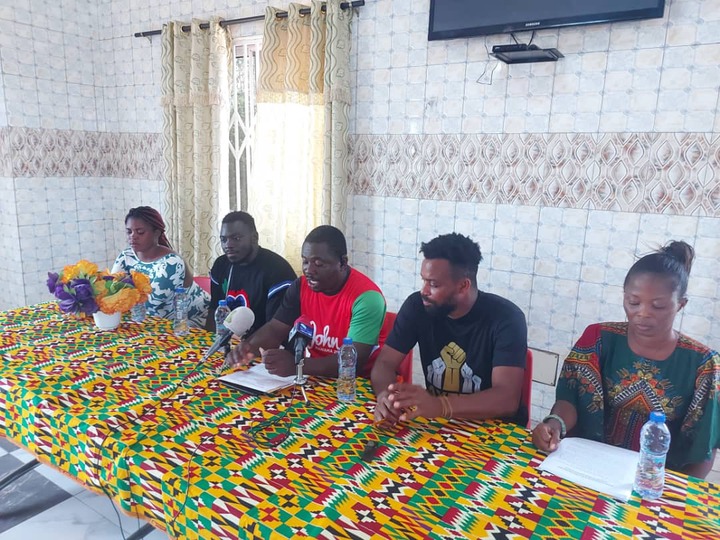 Concerned National Democratic Congress (NDC) Youth in Ada have descended heavily on the former Municipal Chief Executive (MCE) for Ada East for allegedly inflating tension in the area over the Redevelopment of the Songor lagoon.

The Group which made references to certain publications which suggested that the former MCE, Rex Daniel Wusah, instead of encouraging peace in the area, was rather seen in a meeting with certain groups of people, telling them to continue their attacks on Electrochem Ghana Limited.

It would be recalled that the Tema Regional Police Command called all interested parties to a meeting to smoke peace pupe and find a way forward in ensuring peace in the various communities.

However, media reports suggested that after all the efforts by the police commander, the former MCE Dani Wusah allegedly told the people to ignore the police and rather continue with their confrontations and attacks.

This development the Group said, was unfortunate and painted the picture about the NDC especially, in the Sege constituency is that, as behind most of the unfortunate disturbances around the Songor lagoon.

Below Is the statement from the NDC Youth

Good morning to you all.

We the above mentioned group has invited you this morning for a very important briefing on happenings in the media space since Friday16th September 2022.

On Thursday 15th September 2022, the Tema Regional Police Command has reportedly organized a stakeholder’s meeting at the Community 2 Police Station on the happenings in the Ada traditional area that comprises Sege and Ada constituencies. Since the inception of Electrochem GH Ltd there had been various meetings on incidents of clashes, and the latest is on the case of Kablevu in the Ada west District (Sege constituency).

The aim of the meeting was to forestall peace in the Ada traditional area especially around the communities where Electrochem GH Ltd is working and Ada at large. Certain interested parties including the Ada Traditional Council, Electrochem GH Ltd, Ada Youth Forum for Development, Ada Songor Lagoon Association, the Kablevu community including other interested bodies were present at the meeting.

We want to use this opportunity to commend the Regional Police Commander and his team for their effort in ensuring that there is peace in Ada. However we woke up the following day, Friday 16th September to a rather disturbing news which we as a youth group think would affect the already dwindling fortunes of the NDC in the Ada traditional area especially Sege Constituency. The news headlines includes:

3) Some headlines were also on my dailynewsonline.com

What breaks our hearts the most is the headline publication by the New Crusading Guide newspaper of 16th September, 2022 edition with the headline: “STAY CALM!! POLICE TELLS RESIDENTS BUT FORMER DCE INSISTS VIOLENCE MUST GO ON”

In all the three publications, one name and picture ran through. The DCE in the center of these publications is Rex Daniel Wussah, a former DCE of the Ada East District Assembly.

This particular issue is of grave concern to some of us, as members of the great NDC party, whose motto is ‘Unity, Stability and Development.’ We cannot come to terms with the fact that a former DCE who we believed during his tenure of office might have sought for the development of Ada including the Songor lagoon. Knowing his personality, we the youth do not think, the publications reflect what he had wanted to say even if he said something at all.

We are therefore calling on Hon. Rex Daniel Wussah to come out to prove the veracity or otherwise of these publications. Failure on his part to respond to these publications would mean that all what we have read over the last one week is nothing else but the truth, and the effect of his actions on the fortunes of the Party would not be in the interest of all Akatamansonians.

Again we are calling on the NDC rank and file from the constituency to the region and national secretariat to come out with statements on the unfortunate happenings around the Songor lagoon.

Today the picture being painted about the NDC especially, in the Sege constituency is that, the great NDC in Sege constituency is purportedly behind most of the unfortunate disturbances around the Songor lagoon. A statement from the NDC, we believe will clear the air in the manner in which it is being painted in bad light; but knowing the efforts of the party at winning the next election, if issues of this nature continue unattended to, we would say emphatically that the gains of the party especially in the Sege constituency would be affected greatly.

Ladies and gentlemen of the press, we condemn the disturbances at Kablevu in the Ada West District and we further call on the IGP to investigate and prosecute where necessary and also call on the two sitting NDC MPs of Ada West and East to speak to the unending Songor lagoon confusion because, they represent the people of Ada.

In conclusion, we call on the IGP, to keep special eyes on the Ada traditional area especially, Sege constituency to avert any further escalations of any kind.