A 37 year-old teacher has revealed that, much the brouhaha that happened at Ejura was greatly influenced by the NDC member of parliament for Ejura, Hon Braimah. He said the MP is harnessing the opportunity to settle his own issues with some people that attacked him some time ago.

Speaking to Mr. Paul Adom Ochere on the Good Evening Ghana program, Mr.Ibrahim Papa Antarrio who was born and bred in Ejura, the protesting youth wouldn't have gone ahead to organize the demonstration themselves after Kaaka's burial but for the incitement of the Ejura MP.

According to him, the first two suspects arrested by the police were people their MP has had an eye on and vowed to use every opportunity given to deal with them hence he(MP) reported them to the police to be picked. Mr. Ibrahim said the two are innocent whilst accusing Kaaka's own brother, Iddi Mohammed for committing this atrocity.

"If you listen to him through the media, he has been saying that these were the guys who attacked him during the 2020 campaign." So he has vowed is using this opportunity to fight them. He said he was beaten by these two people.

He also said the two are not bodyguards to the Ejura MCE. "As a matter of fact the MCE has no bodyguards, he only goes to the police station to take one particular police officer anytime he is travelling. The two arrested are NPP members but not MCE's bodyguards."

He also mentioned that Kaaka was never a part of the #fixthecountry campaign but was an NPP member. "About 80% of those doing the protest are NDC members. That is why they were destroying only NPP structures. " Mr. Ibrahim said after mentioning several structures belonging to the NPP destroyed in different parts of Ejura. 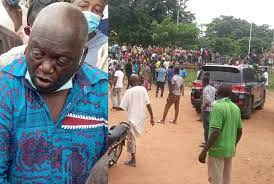