By Sterlingnews (self media writer) | 25 days ago 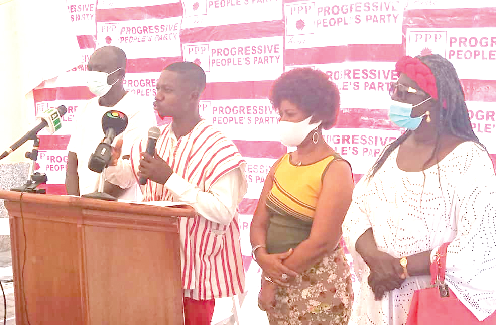 The leaders of the progressive peoples party (PPP) are humbly asking for the amendment of five key things in the 1992 constitution before the 2024 general elections come off.

The aspects of the constitution they are calling for amendment are the election of Metropolitan, Municipal and District Chief Executives (MMDCEs) and the nomination of government appointees into the assemblies.

The other aspects of the 1992 constitution they are demanding for amendment are the merging of the positions of Minister of Justice and Attorney-General, appointment of Members of Parliament (MPs) as Ministers of State, the Declaration of Assets regime and the eligibility of Ghanaians in the diaspora to hold public office.

Mr Richard Niki Armah, the Executive director for PPP, speaking at a press conference, the party said the proposed amendments would eliminate loopholes that created opportunities for corruption.

Mr Armah explained that Articles 242 (d) and Articles 243 (1) and 243(3) must be amended to return power to the people to enable all Ghanaians to directly elect their district, municipal and metropolitan chief executives without any interference from the President and that government must also not appoint people into the District Assemblies.

He continued to say that Article 78 (1) must also be amended to prevent Members of Parliament from being appointed as Ministers of State or MPs must resign from Parliament after their ministerial appointment.

Mr Armah stated that, the party was trying to raise the concept of strict separation of powers as the current arrangement where the 1992 Constitution by design bequeathed Parliament to the Executive had in a way prevented Parliament's ability to exact accountability from the Executive on behalf of the people of Ghana.

He further said that Article 286 (1) and 286 (3) should also be revised to introduce a Public Declaration of Assets Regime as another tool in the fight against corruption.

He stated that the existing system where the Assets Declaration forms and its contents were concealed was not effective, hence the need for a new Assets Declaration Regime where the completed forms would be published and could be accessed by any interested citizen for the purpose of verification.

He also asked for an amendment of Article 94 (2)(a) to enable Ghanaians with dual citizenship to hold public office and participate fully in Ghana’s democratic process.

He stated clearly that there was no justification whatsoever to deny our own people this right of holding public office because they also pump a lot of foreign exchange into the country by way of remittances to their family and friends.

Content created and supplied by: Sterlingnews (via Opera News )