By Ghlatestupdate (self meida writer) | 14 days 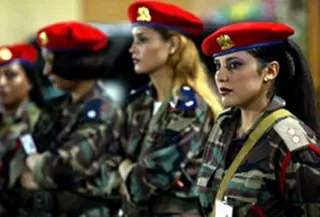 In today’s article, we are going to look at what Gaddafi female bodyguards went through in the hands of the Libyan leaders.

Information gathered shows that the former bodyguards said Gaddafi and his sons raped and abused them and then discarded the women once the men became “bored” with them.

Benghazi-based psychologist Seham Sergewa has collected the details for use by the International Criminal Court (ICC), which is investigating possible war crimes by Gaddafi and his associates. 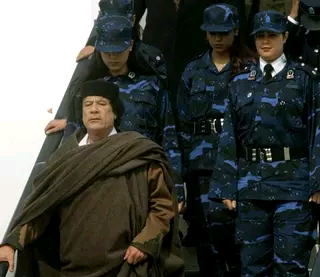 Gaddafihas kept a cadre of about 30 women, known as his Am 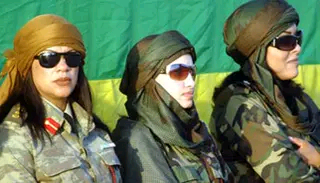 azonian guard, close by his side since the early 1970s. At times, the women took bullets for Gaddafi — one woman died and two were injured when the Libyan leader was attacked in 1998.

The strongman asked his female bodyguards not only for their protection but also for oaths of virginity, and that they are dressed in camouflage, nail polish, coiffed hair, and heavy mascara.

The source said that one of the bodyguards said, she was blackmailed into joining the unit after the regime told her that her brother had been smuggling drugs into Libya and she would go to jail unless she agreed to join the brigade.

“A pattern emerged in the stories,” the Times reports. “The women would be first raped by the dictator and then passed on, like used objects, to one of his sons and eventually to high-ranking officials for more abuse before eventually being let go.”

Serge is also investigating claims that Gaddafi soldiers systematically raped women during the conflict. Some women have come forward saying they were raped by as many as 20 soldiers at a time. 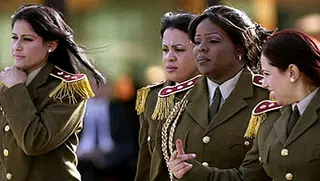 “In one case, a girl, around 18 or so, said she was raped in front of her father. She kept telling him not to look at her,” Serge said.

Other victims have committed suicide or were contemplating it.

ew reports show that the violence against women may extend to Gaddafi’s son Hannibal and wife Aline Skaf, as well. At Gaddafi’s seaside homes, CNN discovered that Hannibel’s nanny had been beaten, starved, and repeatedly burned.

Since June, many Libyan women have also been asked to join the armed forces to fight against the rebels.

“We are going to make sure that every mother, the symbol of love and creation, is a bomb, a killing machine,” government spokesman Moussa Ibrahim.