By Theknightfootball (self media writer) | 1 month ago

The Serie A title race goes down to the wire as Inter Milan host Sampdoria on the final day, knowing that if AC Milan avoid defeat they'll agonisingly miss out on the Scudetto and see their city rivals equal their tally of 19 league titles! Inter will want to put pressure on their adversaries though and a 3-1 victory over Cagliari last time out, which secured an eighth win from their past 12 league games (D3, L1), means they have a solid foundation to do just that. Opta's Stats Perform prediction model may give Inter just a 19% chance of snatching the title, but they won their first Coppa Italia since 2010/11 last week after dispatching Juventus 4-2, and they'll be determined in their search for more glory today. However, if they fail in their quest, manager Simone Inzaghi may look towards a lacklustre period in which Inter took just nine points from seven league games at the turn of the year (W2, D3, L2) as the decisive factor. Inter fans could be forgiven for being confident here though, as Sampdoria have little riding on this game, although the same was true last time out and that didn't stop them from putting a significant dent in Fiorentina's UEFA Europa League qualification hopes with a blitzing 4-1 victory at the Luigi Ferraris. 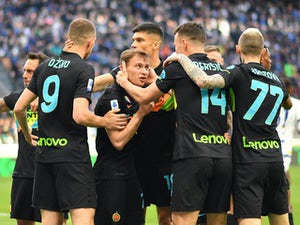 Follow me for more updates on football matches and betting tips.

Content created and supplied by: Theknightfootball (via Opera News )