Zlatan Ibrahimovic smokes a cigar and dedicates the Serie A title to Mino Raiola, his late agent.

By Shantievans16 (self media writer) | 1 month ago 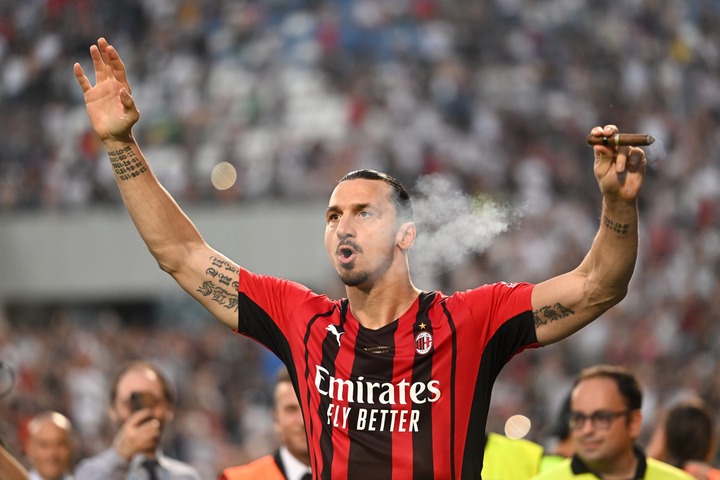 Daniel Maldini becomes the third member of the Maldini family to win the Scudetto with AC Milan, as Zlatan Ibrahimovic smokes a cigar and dedicates the victory to late agent Mino Raiola.

Zlatan Ibrahimovic is still as outrageous as ever at the age of 40, and his celebrations after winning Serie A were exactly what you'd expect.

The Swede has been noted for his outlandish interview statements and insane goals throughout his career, notably a 30-yard bicycle kick against England in 2012.

Ibrahimovic has won 34 trophies in his four-decade career, making him one of the most decorated current footballers in the world.

In classic Ibra fashion, the striker has made headlines yet again for the way he celebrated his latest triumph.

Ibrahimovic stepped out alone towards the winner's podium and the rest of his team after AC Milan won the Serie A title.

As he walked over to his teammates, Ibrahimovic puffed on a cigar while holding a bottle of champagne in his other hand.

His former manager, Carlo Ancelotti, was also photographed smoking away on a cigar as he celebrated Real Madrid's La Liga title earlier this month—a likely source of inspiration for the striker.

Before receiving his medal, the football star made a grateful gesture to the fans. But the celebrity wasn't finished yet.

The victory was dedicated to Ibrahimovic's old agent, Mino Raiola, who died last month at the age of 54.

"I was close to [signing for] Napoli, then he [Raiola] informed me that I was the only one who could save Milan," he remarked after the festivities. As a result, I dedicate it to him. "

Ibrahimovic has yet to decide whether or not he will retire from football. He continued, "I will continue as long as I can produce results while being good on the pitch and without hurting."

When that day arrives, we're confident that his farewell will be as dramatic and eye-catching as ever.

AC Milan fans witnessed a full-circle event on the pitch before Ibrahimovic's moment of glory, with youngster Daniel Maldini stepping onto the pitch to collect his winner's medal.

With his Serie A victory, the 20-year-old midfielder joins his father Paolo and grandfather Cesare as the third generation of Maldini's to win the Scudetto with Milan.

As he walked past the San Siro Stadium's guard of honor, the youngest Maldini clutched his father's hand, marking a momentous moment for the family and the club.

The son and father are identical.