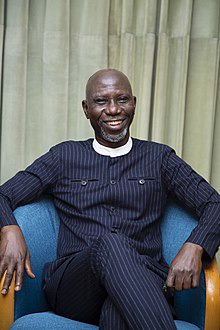 Popular Ghanaian playwright, Uncle Ebo Whyte has said he doesn’t know the actual number of his children despite the fact that he never had the opportunity of having children of his own with his wife.

He told Natalie Fort in an interview that together with his wife, they had resorted to adoption but have migrated from adopting children to children rather adopting them as parents.

According to him, after unsuccessful attempts to have their own, they decided to use their childless situation as a ministry to serve the purpose of God. Instead of ‘childlessness’, Uncle Ebo prefers to say ‘childlessless’.

“What I did was to dedicate my childlessless to God. We tried everything to have children. There is not any specialist in Accra we did not go to see. The funny thing is that there is not any couple my wife and I have prayed for who have not have children. Along the way we came by a few tricks on how to have children, we gave it to a number of couples and they had children. We were not having children. Both of us were healthy, we’ve gone through all the tests so at a certain point I told my wife that “there is something more to this. We can make a ministry out of our childlessless.

“Because we did not choose it, we fought against it. It is not as if she has a problem or I have a problem; it is not as if we are unwilling to seek medical attention. We have seen everyone. I remember one particular case where we went to see a specialist, when we were leaving, my wife was depressed. I have not seen my wife that depressed so I told her it was the last time seeing a specialist. We are going to take our childlessless to see how best we can use it to serve God and that is when the turnaround came”, he narrated the experience.

Looking back, Uncle Ebo is certain that all things worked together for his good.

“Here we are 38 years now thanking God because if we have had children of our own I do not think our attention would have been on anybody’s child to be able to raise the kind of children we have done, to be able to help young people realize their dreams and to rise higher than anybody in their family has ever risen because of their contact with us”, he noted.

He added that infidelity never enticed him because he had learnt from the experiences of his older friends.

“Just before I married, I was blessed to be friends to older men. At a certain point in my life when I was in my 30s my youngest friend was 65years old; I have 80 year old, 85 year old and I would just go to them and sit down and listen to them talk. Through those interactions I learned that marriage is complete with or without children and that stuck very strongly with me and so that model of ‘we are married for children was never my thing because I had been taught differently.

“I also discovered that a lot of those men-who were accomplished men, these were fantastic men-had one regret; that they had had children with multiple women. They’d wished they had all their children with one women because most of them, you could trace the stress in their lives to the fact that they had different sets of children and so they had different sets of problems. Looking at that I realized there is nothing to gain in doing that so it never really appealed to me”, he said.