Effects And Causes of Teenage Pregnancy In The Modern World.

By Townkidjnr (self media writer) | 1 year ago 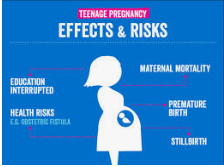 This study used linkable administrative databases housed at the Manitoba Centre for Health Policy (MCHP). The original cohort consisted of 17,115 women born in Manitoba between April 1, 1979 and March 31, 1994, who stayed in the province until at least their 20th birthday, had at least one older sister, and had no missing values on key variables. Propensity score matching (1:2) was used to create balanced cohorts for two conditional logistic regression models; one examining the impact of an older sister’s teenage pregnancy and the other analyzing the effect of the mother’s teenage childbearing.

Content created and supplied by: Townkidjnr (via Opera News )

A Palm Symbol For Happy And Successful Marriage.