Luis And Her Brother Valence Were Born Without Eyes Socket

Life is what happens when you are busy making plans, but the tragic aspect of life is an unexpected scene that makes your plans bitter. This article is about the story of a family with children that were born without eyes. Meet Luis and Valence, the two siblings whose story shocked the world.

According to Luis, they were not born normal like anyone else and have never seen how the world looks before.

Luis parents went through a lot of tough times before giving birth to the extent that when they realized their children did not have eyes, they were not hurt a lot.

Many years ago, Joseph met his wife and fell in love with each other. The relationship kept growing each day, and they started living together as husband and wife. They were expecting children just like any other family. Joseph's wife got pregnant. They took care of their unborn baby till the time for giving birth came. She was taken to the hospital for delivery, but there was no good news at all. Her baby died before she was giving birth.

People and family members consoled and told them that things would be okay. They advised them to give birth to another baby.

They moved on with their life forgetting what had happened, and she got pregnant again. This time around, they were very careful with the baby because they did not want to lose it too. The time for giving birth came, and they went to the hospital expecting good news this time. Things did not turn out as expected because the second baby also died a few minutes after it was born. They did not know what to say about the second death of their baby.

They decided to have another baby and keep trying until they got their child. She got pregnant again for the third time and the pain she went through for the 9 months was not easy but the baby still died. All hope became lost after the third baby died, and they decided to wait for a while before giving birth again. They gave it a try again after some years and this time, the baby was born alive but did not have eyes at all.

The doctors saw it to be so weird as a baby born without eyes but Joseph's wife was filled with a lot of joy instead not because she gave birth to a baby without eyes but a baby that was alive.

Joseph went to the hospital after his wife gave birth. The news was broken to him, though it was not good news, to them, it was a miracle. They decided to love and take care of her.

They started taking their daughter to the local hospitals for treatment, but the medicines were too expensive and their daughter's condition was not improving at all.

As they kept on living their life, Joseph's wife got pregnant again and after birth, it turned out to be something surprising. Though the baby was alive and did not have eyes like the second born but was also vocally impaired. After some time, they became used to it.

A life for Joseph family has been challenging because their children cannot do anything for themselves.

A relative advised Joseph to take his children to school because and improve their abilities. Since they did not have money and know of any disabled school, they took Luis to one of the local schools in their community. Luis visual impairment was a challenge for her to read what the teacher writes on the board, so she decided to get a friend who would explain things to her. 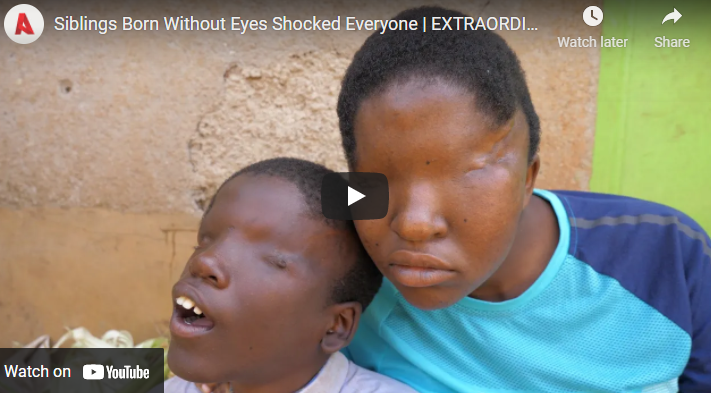 "My Daughter Did Not Commit Suicide, She Was Killed"- Leticia's Mother Gives Medical Evidence